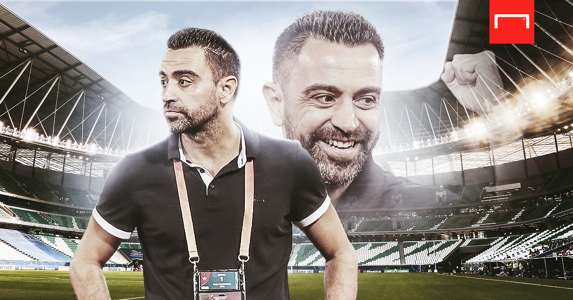 Less than two years before the World Cup is hosted for the first time in the Middle East and the Arab world, excitement is really starting to grow here in Qatar. Friday marks another major step forward in the country’s preparations for the 2022 FIFA World Cup as Friday night, the first ever game will be played at the new Al Rayyan venue, the fourth stadium ready for Qatar’s 2022 tournaments.

The new venue will host the Amir Cup final on Friday, where the club’s manager, Al Sadd, will compete against Al Arabi. The Amir Cup is Qatar’s most prestigious competition and a tournament that every player here wants to win. The game is even more significant as December 18 is also Qatar’s National Day and marks the two-year countdown to the FIFA World Cup final in 2022. The stadium will have 50% capacity for the game, which will be great for the players and should create a good atmosphere and a real sense of occasion after a busy time for everyone.

I initially moved to Qatar to join Al Sadd and extend my playing career. It was a great decision for me and my family to move from Barcelona, ​​my hometown, and a club I love so much, to start over in a whole new part of the world.

At the time my passion for the game was stronger than ever, but deep down I knew that I would no longer be able to contribute as much as I wanted on the pitch of a club like Barca, where every match is a must-win. When I heard about the World Cup project in Qatar from talking to friends like Raúl, who had played here before, I was really impressed with what the country wanted to achieve both on and off the pitch by hosting the tournament.

It was a great opportunity for me to continue playing football, also playing a role in a larger national project, with the goal of achieving great things off the pitch through the programs put in place to provide positive social change beyond the 2022.

When you walk around Doha and meet the locals, their passion for football is clear. I didn’t really know what to expect when I moved here because it was a completely new experience for me, leaving Barca after 25 years, to go to a new part of the world with a different culture and traditions. But I have to admit that I like pretty much everything about life in Qatar. The weather is great, with sunshine most days, and it’s a very relaxing place to work as people are really respectful and friendly. It is also a very safe country with very little crime, so it is a great place to raise a young family.

Since I moved here, I have been able to spend a lot of quality time with my wife and two small children. Since the training takes place in the evening most days, I have time to take my daughter to kindergarten every day and then spend the rest of the morning playing with my son. At the weekend there are so many nice things to do. I often go out to eat at one of the many nice restaurants in Doha, like Spaghetti , which is great for Italian food, or for Bibo , a Spanish restaurant, for a taste of home. The beach hotels here are great and a great place to hang out on the weekends, although recently with the football season in full swing I haven’t had that much time to enjoy this aspect of life in Qatar!

Since moving to Qatar, I have also had the opportunity to work on some amazing charity initiatives. One of the projects – Generation Amazing – became very close to my heart. Use the power of football to empower and educate young people and teach important life skills. The program recently celebrated its 10th anniversary and it was a pleasure to see it grow to the point that it has now positively impacted more than 500,000 people in ten countries. Some of the projects have included building soccer fields in refugee camps and implementing sustainable programs that ensure that the facilities are used effectively. I have attended camp launch ceremonies in Jordan and India and the impact they have on communities is enormous.

Although I originally planned to stay in Qatar just to finish my playing career, when I was presented with the opportunity to take on the role of manager of Al Sadd I was delighted. My family and I had come to love Qatar and the way of life here, so it was a brilliant opportunity for me to take the first step in my managerial career and supervise a team with a number of promising players who are likely to participate in the Qatar national team in 2022. Having played for Al Sadd, I knew it would be a fantastic place for me to move into life on the sideline and help develop some of these players.

It took some time to adapt to my new life as a manager, but I’m having a lot of fun. My philosophy is the same as when I was a player. I like that football is played in a positive way. As a player, I liked having the ball, keeping possession, attacking and creating as many chances as possible. I believe in a game based on ball possession, played at a high pace, and I like my players to understand the importance of playing as a team. Everyone must defend together and attack together. Above all, players need to enjoy playing football and the best way to enjoy football is to have the ball, create many chances and score many goals. This is how I experienced it as a player and this is how I want my players to experience the game under my management.

From my time here, it is clear that football is developing very well in Qatar. The World Cup project meant that they had to really focus on developing not just first-class facilities and stadiums to host the tournament, but a national team capable of competing on the biggest stage with the best teams in the world. Aspire Academy, launched in 2004 to help develop footballers and other athletes in the country, has been a huge success. The new generation of players coming to Qatar is improving a lot. I can see this improvement with my players in Al Sadd and it is a privilege to work with them every day and help them grow in confidence.

With the current rate of development and having recently won the AFC Asian Cup, I think Qatar can compete very well in their first World Cup in 2022. The football culture is growing at a tremendous rate here and I think the World Cup will help take the match to the next level – not just in Qatar but across the Arab region.

While the time will eventually come for me to take the next step in my managerial career, for now I am focused on enjoying my time here and making the most of the opportunity to play a small role in Qatar’s exciting journey into 2022. .