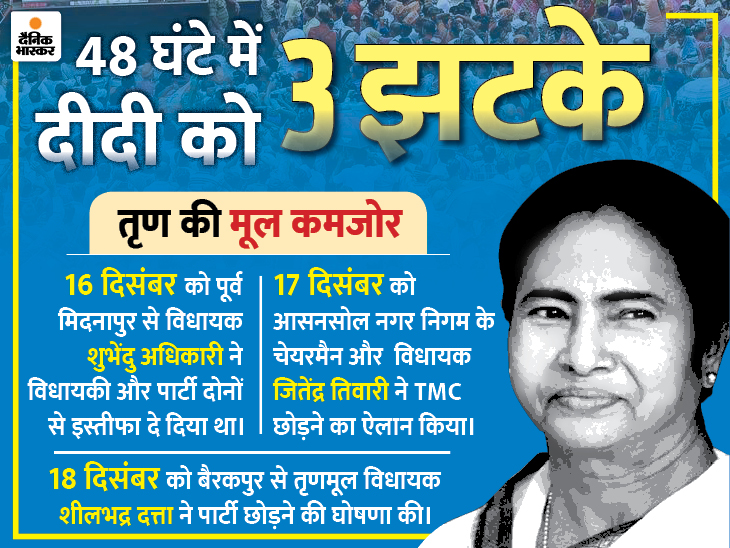 Mamata Banerjee’s troubles are mounting ahead of Assembly elections in West Bengal. On the one hand, the BJP is in siege. At the same time, close associates are leaving him. On Friday, another MLA from the party, Shilbhadra Dutta, quit the party. Datta is the third MLA to leave the party after Shubhendu Adhikari and Jitendra Tiwari. The officer also resigned from the legislature. All three have left Mamata in the last three days.

On the other hand, the central government today issued summons to the chief secretary and police chief of Bengal. He has been ordered to be present in Delhi by 30.0 pm. The Union Home Secretary wrote a letter to the Bengal government on Thursday evening. In response, the state government has suggested a meeting via video conferencing due to Corona.

The Center had also issued summons to both the officials last week following the attack on BJP national president JP Nadda’s convoy. The state government then refused to send officials.

Home Minister Amit Shah is on a tour of Bengal from tomorrow
Mamata Banerjee has called a party meeting just a day before Home Minister Amit Shah’s visit to Bengal. Shah will be in Bengal on December 19 and 20. Here they will hold a rally. It is said that in the meantime he will visit the temple and do a road show. There is also speculation that the TMC rebel Shubhendu officer may be included in the BJP during Amit Shah’s stay in Midnapore.

Three IPS transfers increased
The central government has transferred 3 IPS officers posted in West Bengal. The home ministry on Thursday issued orders for his deputation. State Chief Minister Mamata Banerjee termed the Centre’s move as unconstitutional and termed it an abuse of power.

According to reports, officer Bholanath Pandey has been sent to Bureau of Police Research and Development, Rajiv Mishra to Indo-Tibetan Border Police (ITBP) and Praveen Tripathi to Shastra Seema Bal. The home ministry has asked the state government to keep the three officials alive as soon as possible.

“Despite state protests, the central government has ordered a central deputation of three officers,” Mamata wrote on social media. This is a complete abuse of power as well as an emergency provision of the IPS Cadre Rules 1954.

Kejriwal said the Centre’s decision was an attack on federalism

I condemn the Centre’s deadly interference in the administration of Bengal. Transferring police officers to the Center just before the elections and encroaching on the rights of the states is an attack on federalism and an attempt to destabilize it. https://t.co/sbxpZl0Nn2

On Friday, Delhi Chief Minister Arvind Kejriwal pulled out of the Center over the transfer of IPS officers from West Bengal. He said this is an attack on federalism. “I condemn the compulsory intervention of the central government in the administration of Bengal,” he wrote on social media. Calling police officers on deputation before elections is a violation of the rights of the states.

TMC rebel MLA Jitendra Tiwari left Asansol for Kolkata on Friday along with two other leaders. “While the state government felt that my life was valuable, it gave me protection,” he said. Now that the government feels there is no cost to my life, then my security has been taken away.