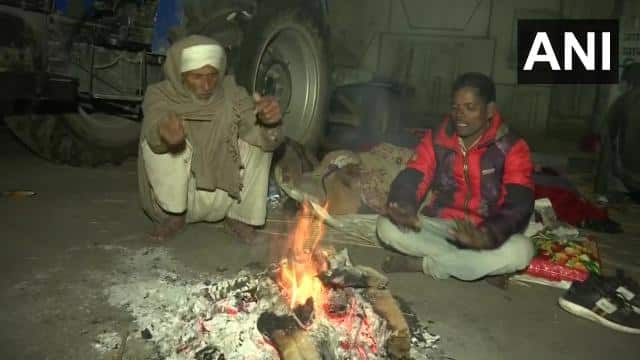 Snowfall and icy winds on the mountains have increased the cold in North India. Cold wave continues in northern parts of the country including Delhi, Uttar Pradesh, Bihar and Punjab. People have been suffering from cold for the last few days and there is no hope of getting relief from the severe cold for the next few days. The cold conditions in Delhi are such that the temperature of mercury reaches 3 degrees Celsius. Wednesday and Thursday were very cold days in Delhi and it is still freezing today. A similar situation prevailed in many districts of UP, where the minimum temperature in Bareilly was recorded at 3.3 degrees Celsius on Thursday. Even today it is cold in Bihar, Delhi, Punjab and UP. People are unable to get out of the house. So let’s find out the weather …

The minimum temperature in Delhi was recorded at 3 degrees today. Delhi’s air has also reached the worst category.

-Delhi-NCR is also facing cold. In Ghaziabad, torico drivers were seen on fire at several places. Autorickshaw drivers say people are not traveling in autos because of the cold and so they have no work.

Ghaziabad: People were sitting by the fire to console themselves.

The autorickshaw driver says, “It’s so cold here, no one wants to travel in an autorickshaw. So, there’s no work for us.” pic.twitter.com/US7cHxCSAx

Mount Abu, a tourist destination in Rajasthan, once again saw a drop in temperature. Mount Abu recorded a low of minus 1.0 degrees Celsius on Thursday.

Extreme cold in Delhi
There is currently no relief from the freezing cold in the capital Delhi. The maximum temperature in the capital fell to 15.2 degrees Celsius on Thursday, which is 7 degrees Celsius above normal. The icy winds continued throughout the day due to the drop in temperature. This was the fourth consecutive cold day, according to the weather department. According to meteorologists, people will not be relieved of the cold waste this week.

According to meteorologists, people felt cold on Thursday due to icy winds with mercury hovering between 2 and 3 degrees. The wind was blowing at a speed of 15 to 20 kmph in the capital on Thursday. Currently, Delhiites will not get relief from the chilling cold till December 21. According to meteorologist Skymet Weather and Vice President Mahesh Palavat, there will be no relief from the cold till December 21. The main cause of cold winds in Delhi is snowfall in the mountains.

Cold wave continues in UP
Lucknow, the capital of Uttar Pradesh, recorded a low of 5 degrees this morning. The plains of UP are in the grip of a cold wave due to snowfall in the mountains. The worst conditions in Bareilly and Meerut are due to cold.

Extreme cold in Bihar too
Even though the weather has cleared in Bihar after a week, people will not be able to get relief from the cold. It was very cold on Thursday. Gusts of icy winds from the northwest were also felt inside the houses. Along with the cloud cover, icy winds coming from the north-west have increased Kanakani in many cities of the state including Patna, Gaya.

The situation in Punjab and Haryana is also dire
Temperatures dipped below zero in many areas in Himachal Pradesh, including Manali. The cold has also increased significantly in Punjab. Cold wave continues in Punjab and Haryana. The temperature here on Thursday was below normal. The minimum temperature in Chandigarh was recorded at 5.1 degrees. Today, that is, even on Friday, tremors occur.