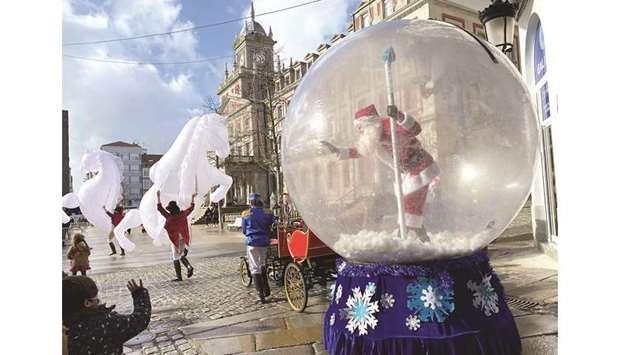 (MENAFN – Gulf Times) A ​​mutated coronavirus strain spreading in Britain is on average 56% more contagious than the original version, scientists warned in a study, urging a swift introduction of the vaccine to help prevent more deaths. .
Coronavirus causes Covid-19 respiratory disease.
According to the study published Wednesday by the Center for Mathematical Modeling of Infectious Diseases at the London School of Hygiene, it is likely that the new variant, which emerged in south-east England in November and is spreading rapidly, is likely to increase hospitalizations and deaths from Covid next year. and tropical medicine.
The researchers, focusing on the English southeast, east and London, said it is still uncertain whether the mutated strain was more or less deadly than its predecessor.
However, increased transmissibility is likely to lead to a large increase in incidence, with hospitalizations and deaths from Covid-19 expected to reach higher levels in 2021 than those seen in 2020, even if restrictions on regional levels implemented before December 19, they said.
The authors warned that a national lockdown imposed in England in November is unlikely to prevent an increase in infections “unless primary, secondary and university schools are also closed.
In the meantime, any relaxation of control measures would likely lead to “a major resurgence of the virus”.
This meant that “vaccine launches may need to be significantly accelerated to have an appreciable impact in suppressing the resulting disease burden.”
In announcing stricter blocking measures over the Christmas holidays, British Prime Minister Boris Johnson said on Saturday that the new virus strain “could be up to 70% more transmissible than the original version of the disease.”
The discovery of the new strain has set off alarm bells around the world just as more countries have begun vaccination campaigns to stop a pandemic that has claimed more than 1.7 million lives since it emerged a year ago in China.
Many countries quickly imposed travel bans from Britain, but EU governments have since started easing the restrictions.
Meanwhile, another new variant of the novel coronavirus appears to have emerged in Nigeria, the head of the African disease control body said yesterday, warning that further investigation was needed.
The news comes after Britain and South Africa both reported new variants of Sars-CoV-2 (the official name of the coronavirus) that appear to be more contagious, leading to new travel restrictions and market turmoil.
“It is a separate lineage from the UK and South African lineages,” said John Nkengasong, director of the African Centers for Disease Control and Prevention (CDC) at an online press conference from Addis Ababa.
The discovery of the new variants in Nigeria and South Africa prompted an Africa CDC emergency meeting this week, Nkengasong said.
He said there is no evidence that the new variant is contributing to the increase in transmission in Nigeria, but he warned that the country does less genomic surveillance than Britain.
Nigeria CDC and the African Center of Excellence for Infectious Disease Genomics in Nigeria will study more samples, Nkengasong said.
‘Give us some time … it’s still very early, he said, in response to questions about the variant.
The new variant of the coronavirus that is spreading rapidly in Britain was first found in Germany, the German state of Baden-Wuerttemberg said yesterday.
The infected person flew to Frankfurt from London Heathrow on 20 December to visit relatives and tested positive on arrival.
Further genetic analysis of the sample in a laboratory in Berlin produced a case of B117, as the variant is known, the Southwestern German state’s health ministry said in a statement.
‘This is the first known case in Germany, he added.
The person, who has since developed mild symptoms, was picked up from the airport by car by family members and has since been isolated at the family’s residence in Baden-Wuerttemberg, the ministry added.
Three people who were in close contact with the person were also quarantined, he said.
Denmark has identified 33 infections with the new British variant of the coronavirus, according to authorities.
The State Serum Institute (SSI), the Danish infectious disease authority, said in a report released Wednesday that the cases had been found in coronavirus tests carried out between November 14 and December 14.
Preliminary information did not suggest that the 33 people who contracted the variant had any connection to England or had traveled to other countries, SSI said.
Singapore has confirmed its first case of the UK coronavirus variant, the city-state said, while 11 others who were already in quarantine had returned preliminary positive results for the new strain.
All cases, imported from Europe, had been quarantined for 14 days in dedicated or isolated facilities upon arrival, and their close contacts had been quarantined earlier.
“There is currently no evidence that the B117 strain is circulating in the community,” Singapore’s health ministry said Wednesday.

Legal Disclaimer: MENAFN provides the information “as is” without guarantees of any kind. We accept no responsibility for the accuracy, content, images, videos, licenses, completeness, legality or reliability of the information contained in this article. If you have any complaints or copyright issues related to this article, kindly contact the supplier above.