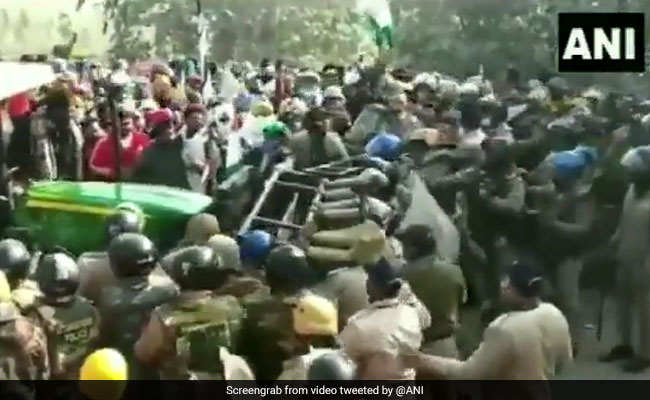 Police barricaded and tried to stop the tractor ….

On Friday, clashes broke out between farmers and police in Udham Singh Nagar (Udham Singh Nagar) district of Uttarakhand in protest of new farm laws brought by the central government. Here the protesters barricaded the farmers from going to Delhi
So the farmers climbed on the tractor just above the barricade.

A video released by news agency NNI shows a large crowd of protesters facing police. Some protesters storm the barricade with a green tractor, drop it and force the police to pass through the tractor.

Since last month, thousands of farmers have camped on the capital’s borders against three new laws, which they say will lead to the disintegration of regulatory markets. They also fear that the government will stop buying wheat and rice at guaranteed prices and leave them at the mercy of big corporators.

Farmers’ unions have demanded the repeal of the laws and warned of a major agitation if their demands are not met. Several rounds of talks between ministers and peasant leaders have failed to make progress. Prime Minister Narendra Modi on Friday offered a new talk to end the deadlock.

Also read- Farmer Dialogue: Prime Minister slammed the Opposition – where were the people who were shedding tears in the name of the people when the land was being seized

In a speech to millions of farmers across the country, he asked farmers to dispel their misconceptions that the law would give them the freedom to sell their produce “anywhere and to anyone”.

A large number of protesting farmers are from Punjab and Haryana, but their demand has been supported by farmers in other parts of the country, including Uttarakhand. Sunderlal Bahuguna, the leader of the Chipko movement, a popular defense campaign in the state in the 70s, gave his support to the protesting farmers last week.