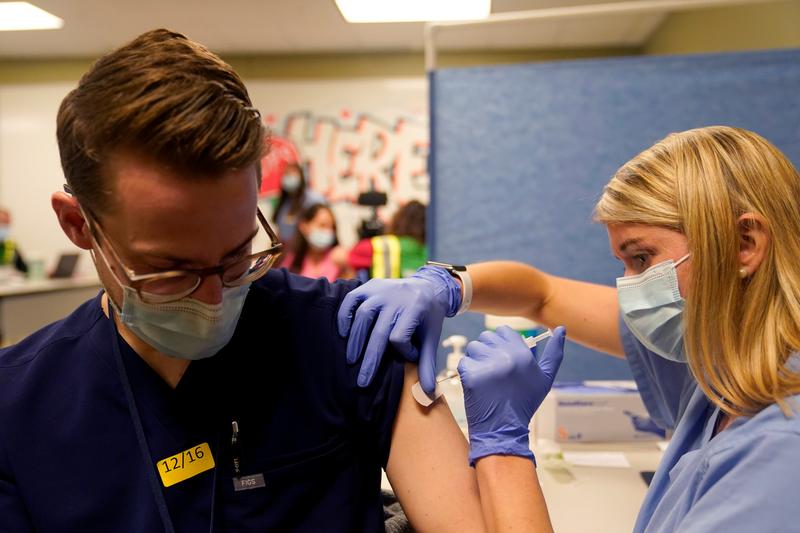 NEW YORK (Reuters) – The United States, faced with a backlog in administering coronavirus vaccines, is asking medical and nursing students, and even firefighters, to help shoot and free health workers fighting a pandemic rages in overcrowded hospitals.

At least seven state health departments are looking for volunteers for their vaccination sites, some partnering with local universities or nursing schools to offer incentives like tuition discounts and hands-on training. Others are teaching first responders to administer shots.

The nationwide launch of COVID-19 vaccines are the best hope for ending a pandemic that has claimed the lives of over 320,000 Americans and crippled the U.S. economy.

This month, U.S. regulators cleared the first two COVID-19 vaccines, one from drug makers Pfizer Inc and BioNTech SE and another from Moderna Inc.

As of Wednesday, nearly 10 million doses have been delivered nationwide, but only about 1 million have been administered due to staff shortages in hospitals and special requirements for shot preparation. The slow pace of the vaccination campaign threatens the federal government’s goal of inoculating nearly 20 million people by the end of the year.

While inoculation is currently focused on frontline health workers, the vaccination campaign is expected to extend to tens of millions of essential industry workers starting in January or February.

From New York to Tennessee, states are hoping medical and nursing students will free medical staff focused on caring for the record number of new COVID-19 patients.

“Being able to staff vaccination clinics with volunteers from our backup workforce means that staff at vaccination sites can continue to perform their normal duties, which is critical as our hospitalization rate has increased,” a spokesperson for the Indiana University School of Medicine said.

‘STRIKE BACK AGAINST COVID’

When the first vaccines arrived, Indiana health officials called the state university because of its far-reaching campuses. More than 630 Indiana University medical and nursing students have signed up as volunteers and receive 90 minutes of hands-on and online training.

“It finally looked like it was a real, tangible attack on COVID,” said Clough, 26.

The University of Wisconsin offers a $ 500 tuition credit to students with medical credentials who work in understaffed hospitals during the winter break, including administering vaccines.

The university is also speaking with government officials about turning the universities into vaccine distribution centers, a spokesperson said.

In California, fire department paramedics were trained to administer the vaccine, initially to colleagues.

“They’ve already received online training and will have another one-hour live training session,” said Peter Sanders, a spokesperson for the Los Angeles fire department, who was expecting his first shipment of the Modern COVID-vaccine. 19 Wednesday.

“We encourage all medical and nursing students to register now so they are ready when their assistance is needed!” a spokesperson for the health department said.

Other states are not actively recruiting nursing students. A spokesperson for the Georgia Department of Health said the state may do so later as the vaccine becomes more widely available to the public.

Depending on state licensing laws, medical and nursing students can administer vaccines, often under the supervision of a licensed practitioner.

At least two states, Massachusetts and New York, have changed their laws in recent weeks to expand those who can strike.