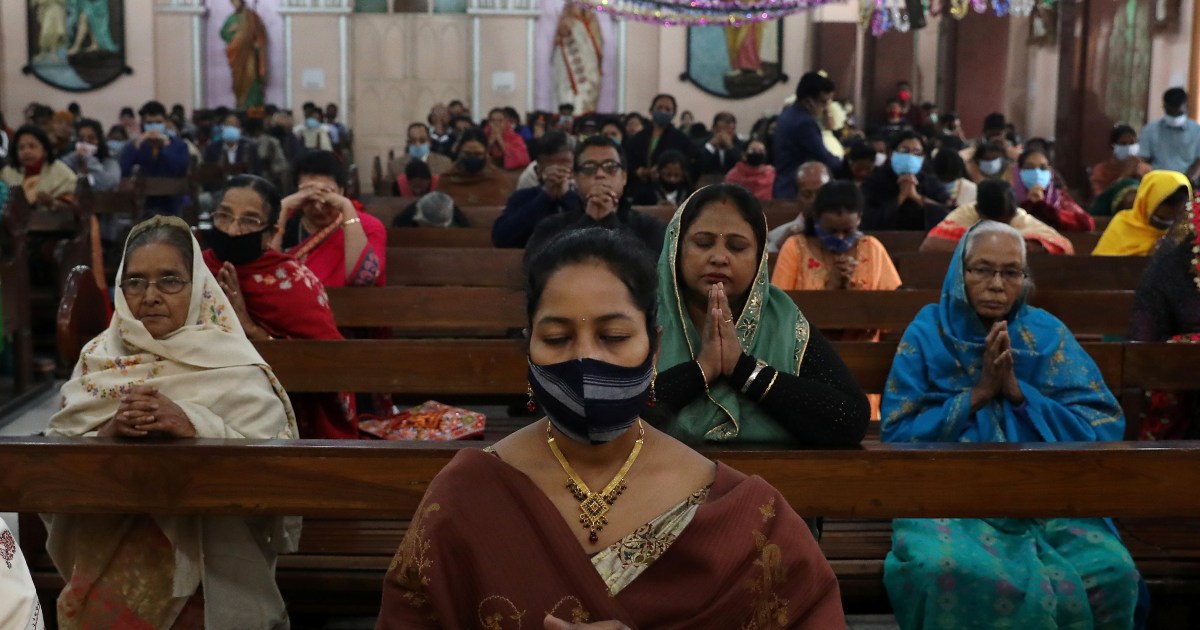 Global Christmas celebrations are taking place amid the coronavirus pandemic, with millions of people limiting the holidays in an effort to spread further contagion.

Many will spend Christmas in mourning after the health crisis has claimed the lives of 1.7 million people so far this year.

Let’s take a look at how different countries are marking the holiday.

In the Palestinian city of Bethlehem, people celebrated Christmas Eve with only a small number of traditional event attendees. But city leaders said they were determined to send a message of hope.

“There are restrictions on the movement of people and social networks, but it’s Christmas, Christmas gives people hope in better times,” said Mayor Anton Salman, standing next to the huge Christmas tree in Manger Square.

“So we are celebrating the holiday by all means, the only thing missing at this stage is the large crowd, as it was in previous years, but the people in Bethlehem are optimistic that the future will be better.”

Latin patriarch Pierbattista Pizzaballa led the Christmas Day Mass on Friday in the Church of the Nativity in Bethlehem, as the biblical city celebrated the holiday in a subdued atmosphere.

In Lebanon, the government lifted most of the virus measures before the holidays, hoping to stimulate the economy. Tens of thousands of Lebanese expats returned home for the holidays, but there were some fears that this could lead to an increase in cases during the holiday season.

Lebanon has the highest percentage of Christians in the Middle East – around a third of its 5 million people – and traditionally celebrates Christmas with much fanfare.

Egypt canceled all New Year celebrations to stem the increase in cases.

Meanwhile, celebrations in Europe have been canceled or significantly downsized as virus infections rise across the continent amid fears of a new, more contagious variant.

In UK, people greeted Christmas Eve with a Brexit trade deal, news welcomed with relief and, by some, a hint of skepticism.

British Prime Minister Boris Johnson posted a video on his Twitter account in which he broadcasts his Christmas message. Waving the thick stack of papers documenting the Brexit trade deal with the European Union (EU) in front of the cameras, Johnson said it was a “little gift for anyone looking for something to read at that sleepy lunchtime. post-Christmas “. “.

I would like to wish everyone a Merry Christmas. pic.twitter.com/DofRkb4Ivc

The Queen’s annual Christmas speech is expected to air Friday at 3pm GMT.

In Italy, the church bells rang earlier than usual. The Italian government’s curfew at 22:00 (09:00 GMT) has prompted pastors to shift services, with “midnight” mass starting Thursday evening in some churches as early as a couple of hours after sunset.

In Vatican CITY, Pope Francis, who just celebrated his 84th birthday, lined up and held a mass in a rear part of St. Peter’s Basilica with fewer than 100 attendees and only a small number of cardinals and bishops.

On Friday he called on countries to share COVID-19 vaccines, saying it is not possible to build walls of nationalism to stop a pandemic that knows no borders. Francis delivered his traditional “Urbi et Orbi” message (to the city and to the world) virtually from a lectern inside the Vatican.

“In this historic moment, marked by the ecological crisis and serious economic and social imbalances only aggravated by the coronavirus pandemic, it is all the more important for us to recognize each other as brothers and sisters,” he said.

It also highlighted the plight of the children involved in the war, identifying the victims in Syria, Yemen and Iraq.

In Greece, Christmas Eve was strangely quiet. In normal times, children’s voices singing Christmas carols as metal triangles jingle can be heard all day. The 10-year custom, whereby children go from house to house and receive small gifts, was banned this year.

Groups of children managed to honor the tradition by singing to Prime Minister Kyriakos Mitsotakis via video link – including students from a school for hearing impaired children who performed in sign language.

Chancellor Angela Merkel urged Germans to avoid visiting family members at Christmas and instead use video calls for greetings, as do overseas room service members, as the country fights COVID. Germany is struggling with an increase in coronavirus infections and deaths.

In South Korea, people woke up on Christmas morning to learn that their coronavirus crisis took another turn for the worse when officials closed ski resorts and national parks, restricted hotel occupancy, and imposed fines for restaurants that they accept large groups to stop a viral wave that has increased employment and deaths.

The nation was previously seen as a model of how to fight the virus, with the public largely following official guidelines, but Friday saw a record 1,241 new infections.

“We strongly advise and ask you to cancel all meetings and meetings, even with your close family members,” said Yoon Tae-ho of Central Disaster Management Headquarters.

In China, authorities in the northeastern port city of Dalian are testing millions of residents after seven new cases of coronavirus have been reported in the past 24 hours.

The cluster that emerged in recent days has grown to 12 cases. In five neighborhood divisions, authorities have closed schools and public spaces and are preventing anyone but essential workers from leaving their housing estates.

In Australia, Millions of Sydney residents have been asked to restrict their mobility over the Christmas holidays, with some families locked up and festive gatherings limited to 10 visitors inside.

Australia’s most populous city has been virtually isolated from the rest of the country with the closure of the state border or the mandatory 14-day quarantine for arrivals in Sydney.

“Aside from those close family reunions, which we allowed over the Christmas holidays, we don’t want people to move unless you absolutely have to.”

In United States, Americans are celebrating a sad Christmas as coronavirus infections have exploded nationwide. Political leaders have warned people against traveling or gathering in large groups.

More than a million people have received the first of two doses of the vaccine since December 14, according to the U.S. Centers for Disease Control and Prevention.

Achieving herd immunity against the virus could require vaccination of up to 90 percent of Americans, Dr Anthony Fauci, America’s foremost infectious disease expert, told The New York Times in an interview.

“This is the best gift I could have received in 2020,” Ramirez said, adding that it would give her the strength to continue the “war” against the pandemic.

In Costa Rica, health workers gave the first doses of Pfizer vaccine to an elderly couple in a house near the capital, San Jose, while around 300,000 doses of the Russian Sputnik V vaccine arrived in Argentina.

“My message is that everyone should be vaccinated,” said Jorge De Ford, a 72-year-old former university professor who was one of the first two people in Costa Rica to receive the injection.

Meanwhile a BrazilPresident Jair Bolsonaro used his Christmas message to cast further doubts on a coronavirus vaccine bought by one of the country’s states, from Chinese biopharmaceutical company Sinovac.

In his live broadcast on social media Thursday, Bolsonaro said that “the effectiveness of that São Paulo vaccine appears to be very low,” although he did not add specific details.

Brazil so far has no agreements to import vaccines made by Pfizer or Moderna, which have been approved by the United States and other nations. It has an agreement to secure up to 100 million doses of the potential vaccine produced by AstraZeneca.