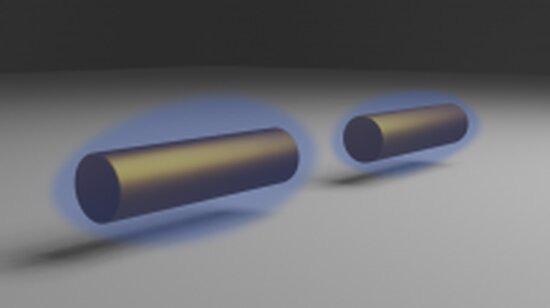 A group of researchers has now solved the age-old question of how electrons collectively move as a group within cylindrical nanoparticles.

The new study offers unexpected theoretical advancement in the field of electromagnetism, with further perspectives for research on metamaterials.

The group of theoretical physicists, from the University of Exeter and the University of Strasbourg, have developed an exquisite theory that explains how electrons move together in small cylindrical metal nanoparticles.

The study offered new insights into the ways in which light and matter interact at the nanoscale, with implications for achieving future nanoscale devices that exploit nanoparticle-based metamaterials with beautiful optical properties.

The ion core of metal nanoparticles is positively charged, where a cloud of negatively charged electrons revolves around it. The electronic cloud is displaced when light hits such a metallic object.

This shift causes the entire group of electrons to oscillate relative to the positive nucleus. Electrons swinging back and forth act as a single particle (called a quasiparticle) or a “plasmon”.

The plasmon is mainly characterized by the frequency at which it oscillates, called the plasmon resonance frequency.

In modern electromagnetism, a key task is to explore how the plasmon’s resonant frequency varies based on the geometry of its host nanoparticle. In general, it is believed that analytical theory can be used to describe only certain geometries of specific nanoparticles, without resorting to laborious and time-consuming numerical calculations.

It is widely believed that the list of geometries that allows an analytical description is very short and includes only ellipsoidal and spherical nanoparticles.

This aspect is largely undesirable due to the experimental ubiquity of cylindrical nanoparticles, which emerge in a range of aspect ratios ranging from thin, pancake-like nanodiscs to long, needle-like nanowires.

As part of the study, the team explored how plasmons oscillate in cylindrical nanoparticles. They used a theoretical method based on nuclear physics and developed an elegant analytical theory that elucidates the behavior of plasmon in cylinders with arbitrary proportions.

Using the theory, the researchers offered a comprehensive description of cylindrical plasmonic nanoparticles, describing only the plasmon resonance in metal nanoparticles ranging from circular nanodiscs to nanowires.

Both condensed matter theorists also considered the plasmon response of two coupled cylindrical nanoparticles and arrived at quantum mechanical corrections to their classical theory, which holds true thanks to the small nanometer sizes of the nanoparticles.

Quite unexpectedly, our theoretical work provides a deep analytical view of plasmonic excitations in cylindrical nanoparticles, which can help guide our experimental colleagues fabricating metal nanotubes in their laboratories..

According to Guillaume Weick of the University of Strasbourg, “There is a trend of increasing reliance on heavy calculations to describe plasmonic systems. In our throwback work, we reveal that simple pen and paper calculations can still explain intriguing phenomena at the forefront of metamaterial research.. “

The theoretical advancement can be applied immediately by several researchers working with nano-objects in the cutting-edge scientific field of plasmonics. Researchers expect that, in the long term, plasmonic excitations can be exploited in the next generation of ultra-compact circuits, data storage and solar energy conversion, as the technology becomes increasingly miniaturized.