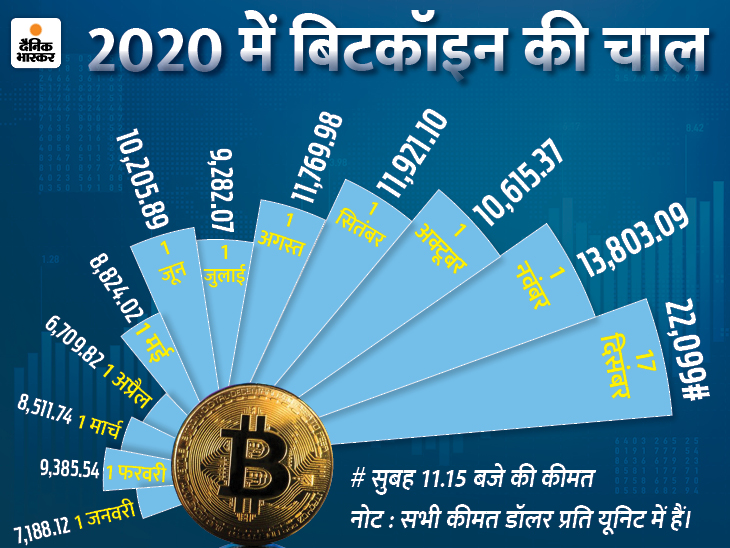 The cryptocurrency Bitcoin has reached record levels this year. On Thursday, it rose 6.6%, bringing the price of Bitcoin to 22,099 (11.15am), or about Rs 16.24 lakh per unit. This year, its price has increased by more than 170%. For quick profits, large investors have turned to it, which is rapidly increasing its value.

There has been 170% growth so far this year
So far this year, its price has increased by 170%. After Corona, the price of Bitcoin went up to 000 4000 per unit in March. But now, due to the weakness of the dollar, Bitcoin is rapidly recovering. At the same time, interest in cryptocurrencies has increased due to the recent decline in gold prices.

This is also one of the reasons for the rise of cryptocurrency
BlackRock (BLK), the world’s largest asset management company, predicts that Bitcoin could one day replace gold as a safe haven. There is also believed to be a reason for the rise in the price of Bitcoin. Bitcoin may also gain momentum due to the rise in prices of small cryptocurrencies, Ethereum, XRP, Lightcoin and Stellar.

What is Bitcoin?
Bitcoin is a virtual currency. It is also called digital currency. Bitcoin is a currency that you cannot see or even touch. It is stored in electronic form only.

Started in 2008
Bitcoin was invented in 2008. Bitcoin was officially launched in 2009. In India, no cryptocurrency, including Bitcoin, has been legalized yet.