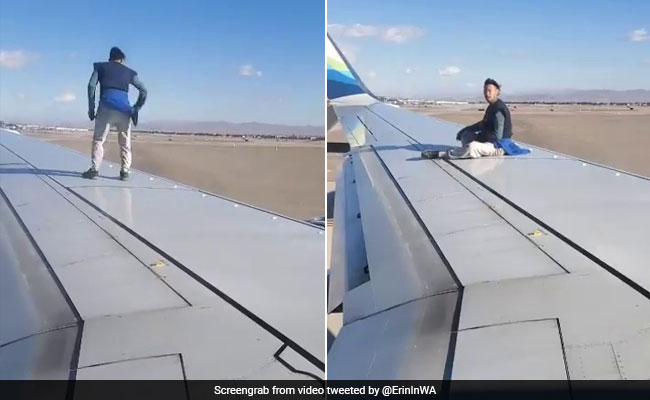 Alejandro Carlson got on the wing of a plane in Las Vegas.

Las Vegas police arrested a man who boarded the wing of a plane just before takeoff on Saturday. According to ABC News, the man – identified as Alejandro Carlson – stepped onto the runway at McCarran International Airport and managed to get on the wing of an Alaska Airlines plane. The Las Vegas Metropolitan Police Department said it appeared to have climbed over the airport fence to reach the plane.

The flight to Oregon was interrupted due to the 41-year-old’s stunt, which lasted 45 minutes as he walked along the wing of the plane and also took off his shoes and socks before losing his balance and falling onto the tarmac.

Videos shot by passengers inside the plane captured the bizarre incident. “It was definitely one of the weirdest things I’ve ever seen in my life,” Erin Evans, a passenger on the plane, told ABC News.

Alaska Airlines, in a statement obtained by USA TODAY, said that the flight “was preparing for take-off when the pilot noticed an individual advancing towards the plane. The pilots warned the tower. Law enforcement was dispatched. is [was] capable of capturing the individual “.

Alejandro Carlson was arrested by police officers after falling from the wing. He was treated for minor injuries and arrested at Clark County Jail for trespassing and indifference to public safety.

An investigation into the case is ongoing.