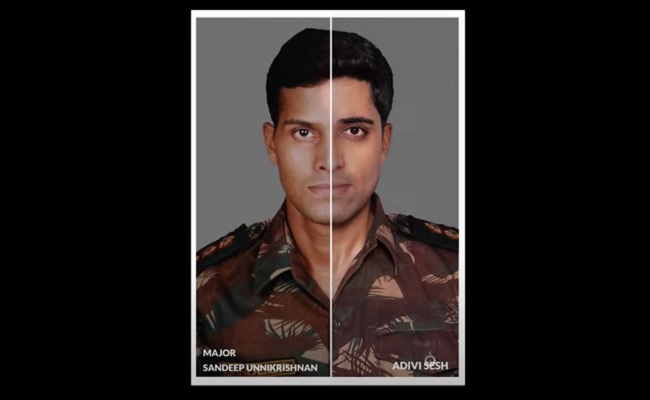 The job of an actor is to play his role appropriately and for this it is necessary to undergo a physical transformation sometimes according to the requirements of the character they play.

In addition to physical stress, there will also be mental stress when they play a stimulating or real-life character.

Coming to the point, actor Adivi Sesh plays the most difficult role in his next film Major inspired by the life of Major Sandeep Unnikrishnan, who was martyred in the 11/26 terrorist attack in Mumbai.

Firstly, it was really hard for Sesh and his team to convince Major Sandeep’s parents that they have been approached by many directors previously with the proposal to make a biopic about their son.

Baffled by their sincerity in making the film and also because Sesh bears a resemblance to Major Unnikrishnan, the martyr parents gave the team the green light.

Then, Sesh began rigorous training to do justice to the role of an army officer.

He lost 10kg to get fit for Major and also worked with a personal trainer at home.

“More than his physicality, I needed to understand his soul. He is a national hero and I have a responsibility to keep him as real as possible. The idea is not to imitate but to understand Major Sandeep Unnikrishnan, ”Sesh explains.

All of Sesh’s hard work for this film can be seen in the promotional content. The test look poster and then the first look poster received a wonderful response and raised the bar.

Directed by Sashi Kiran Tikka, Major finished 70% of the shoot. The film is scheduled for release in the summer in 2021.