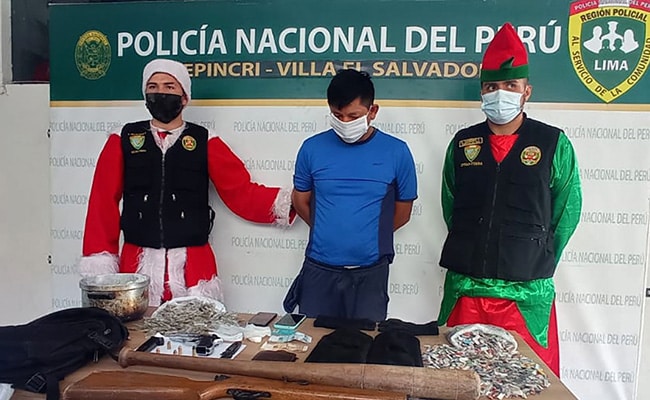 Peruvian police drug squad members disguised as Santa Claus and an elf swooped into a house in Lima not to deliver gifts but to catch a suspected cocaine and drug dealer as part of a drug operation.

The officers, dressed in red, white, and green suits with bulletproof vests tucked underneath, arrived Sunday in an undercover van before entering the house with a large hammer to arrest the suspect.

“We are the police, we are the green team, this is an anti-drug operation,” shouted one of the officers in a video filmed by the police of the raid, as he pinned the suspect to the ground and handcuffed him at Villa El District of Salvador in Lima. .

The tactic of launching raids specifically to take down drug gangs using transvestite agents is a common Peruvian police tactic to secure the element of surprise which, they say, has brought some notable successes in recent years.

The arrested man was filmed spending drugs outside his home near a school, a police spokesman said. At home, police found a bag with hundreds of small bags that appeared to contain drugs, a revolver and a balaclava, he said.

“With the results we are seeing, a significant amount of drugs have been confiscated, both marijuana and basic cocaine paste in ketes (small packets of drugs), a firearm has also been confiscated,” Colonel Fredy said. Velasquez, head of the Grupo Terna drug team.