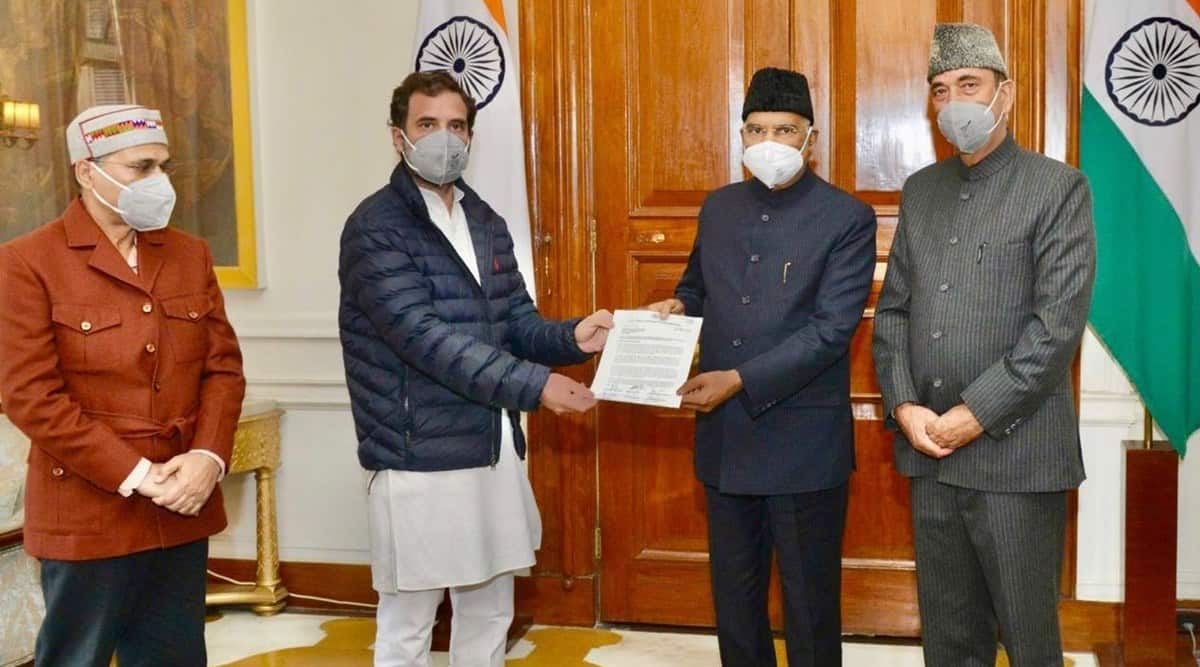 Congress leaders Rahul Gandhi, Ghulam Nabi Azad and Adhir Ranjan Chowdhury met with President Ram Nath Kovind on Thursday and called for the withdrawal of the recently enacted agricultural laws. Gandhi told the president that the laws were “anti-farmer” and would cause farmers to suffer enormous losses. He said the opposition stood with the farmers who were camping on the outskirts of Delhi For more than a month now they have been calling for the repeal of legislation.

Speaking to the media outside Rashtrapati Bhavan, Gandhi targeted Prime Minister Narendra Modi for his “incompetence” and “destroying the agricultural system”.

“I want to tell the Prime Minister that these farmers will not return home until the laws are repealed. The government should convene a joint session of parliament and withdraw the laws.

“We have collected thousands of signatures … the voices of farmers. The Prime Minister will have to listen to them. The whole country is watching. It is cold, the peasants suffer, they die. I’m warning you. Nobody can stand against the farmers, ”Gandhi said.

The delegation, made up of leaders in both Houses of Parliament and senior party members, hoped to present a petition signed by nearly 2 million farmers and laborers across the country.

“India is on a dangerous path. Being detained, beaten is the norm for this government. There is no democracy in India. It is in one’s imagination, not in reality, ”Gandhi said.

Meanwhile, Priyanka said it was the government’s duty to listen to farmers. “They will have to take responsibility. They are responsible to the Indian people. A resolution can only come when they listen, “he said.

Venugopal called the police action a “violation” of rights and said the party “must be allowed to express (our) concerns as the main opposition”.

Congress, which accused the government of passing “anti-farmer” legislation in an “undemocratic” way, launched its signature campaign against agricultural laws in September. The party had asked its state units to collect the signatures of farmers and merchants from the Agricultural Market Committee.

Thousands of farmers are camping on the borders of Delhi, calling for the repeal of three controversial laws.