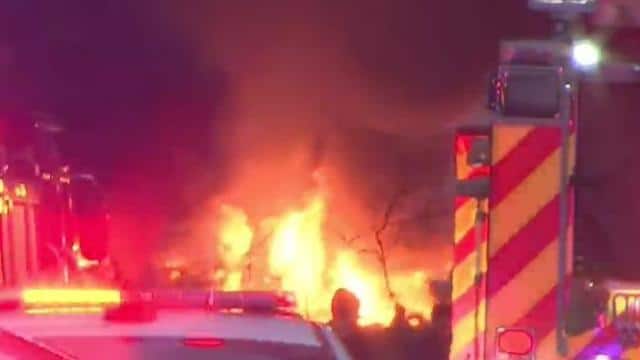 On Christmas morning, a vehicle exploded in Nashville, USA, hitting a large area of ​​window glass and other debris. The tremors were felt in the surrounding houses and people were shocked. The three injured have been rushed to hospital immediately. After a preliminary investigation it is being described as part of a conspiracy.

The Metro Nashville Police Department tweeted that the blast occurred at 6:30 a.m. Friday, prompting provincial and federal officials as well as the fire department and other emergency services. Flames and black smoke were seen at the scene. It is crowded with tourists and has restaurants and many other retail shops.

A: Security camera footage of the cantonment at the Exchange of Futs on Church Street shows the moment of the explosion in downtown Nashville. Video courtesy of Kurt Webster. pic.twitter.com/jtQGoE5Urz

“The explosion was huge, you can see,” a Nashville police spokesman said. Extensive investigations are being carried out by police departments and federal agencies, the FBI and the ATF. We believe the explosion was intentional. However, police did not reveal the motive behind the blast.

Another car bomb in Nashville is not “trending”, is the media hiding it? U.S. We are at war with fraudulent elections, crooked judicial and legal branches appearing to overthrow the republic. Everyone is coming # DC Jan 3-7 Bring your pitchforks!pic.twitter.com/e8zGrkw7wl