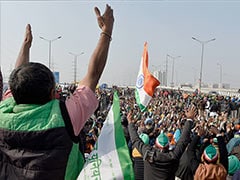 Farm Laws 2020: The Supreme Court suggested the formation of a farmer-government committee.

Farmers protest: The petitions regarding the farmers’ agitation were heard in the Supreme Court on Wednesday. The Supreme Court has allowed the Indian Farmers Union and many other farmers’ unions to form parties in the case. The court has issued notices to the Center, Punjab and Haryana and they will have to reply by tomorrow. The matter will be heard tomorrow.

The Supreme Court said during the hearing that we will form a committee on the matter, which will resolve the issue. It will have farmers’ organization, central government and others. The court also said that “it seems that the settlement between the government and the farmers does not seem to be resolved now.” The Supreme Court said Taskar’s remarks would fail and would soon become a national issue. We will resolve this issue by forming a committee.

After considering the petitions, the CJI said that the only basis in the petition seems to be that the issue is of ‘free movement’, which is affecting the people. “Apart from us, there are no people who have blocked the road,” he told Solicitor General Tushar Mehta. The SGA said we didn’t block the road. “Did you stop farmers from coming to Delhi?” The CJI asked. The CJI asked, “Where is the farmers’ union?” “The government is negotiating,” the SGA said.

The SGA said there have been several rounds of talks with the farmers, but the farmers are adamant about repealing the law, they want an answer from the government in yes or no. He said it would happen if the farmer would argue the clause with the clause.

Also read: Ragda in 15KM, documentary somewhere! What do farmers do at night to escape the bitter cold?

Three petitions have been filed in the court

It may be mentioned that three petitions have been filed in the Supreme Court regarding the peasant movement. CJI S.A. on these petitions. Bobade, Justice A.S. A bench of Bopanna and Justice V Ramasubramaniam is hearing the case. In the first petition, Delhi resident Habshabh Sharma has demanded the removal of frozen farmers on Delhi’s borders. The petition states that this exposure has increased the risk of COVID19 spreading and people are having difficulty moving forward. The petition said officers should be ordered to open the border immediately. Also, the effect should be moved to a certain place with social distance and masks etc.

The second petition demanded that farmers have been sitting on the borders of Delhi for the last several days, but the central government has remained silent. In such a situation, the Supreme Court should direct the Central Government to consider the demands of the farmers. Provide basic facilities to the farmers also. NHRC Investigation reports for human rights violations against farmers have also been sought from and adequate compensation has been sought by the police force for the farmers who have been the victims of the attack. This application has been made by Advocate GS Mani.

The third petition said that the protesting farmers should be allowed to enter Delhi and they should be allowed to protest in compliance with the guidelines of COVID-19 at Jantar Mantar, the designated place for protest. The petition filed by Advocate Ripak Consul said that the court needs asylum for the protection and safeguarding of the ‘human and fundamental right’ of farmers ’protest, which the petitioner said is required by the states in Delhi. Admission is not allowed. The petitioner has prayed for the enactment of guidelines or legislation to balance the unrestricted access of citizens and their right to traffic and protest in any other state.