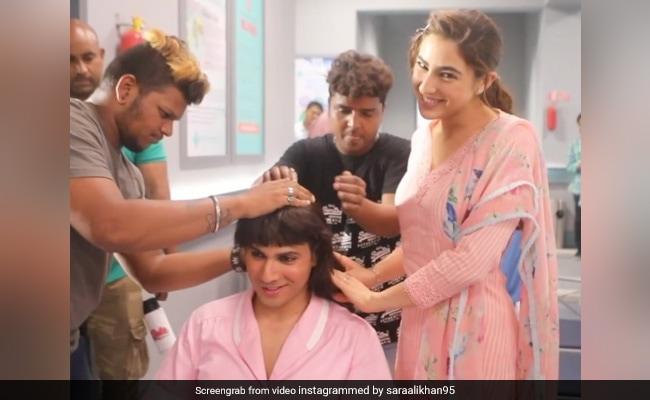 Sara Ali Khan and Varun Dhawan’s film Coolie No. 1 is going to be released soon. Stars is currently busy promoting the film. Sara Ali Khan has shared a video of the set of the film, in which she is seen having fun with Varun Dhawan. Sara Ali Khan Video shared this video on Instagram. Fans love her style.

Amrapali Dubey and Nihua groom have been tracked down, photos and videos are going viral

In the video shared by Sara Ali Khan, it can be seen that Varun Dhawan is getting ready for his role when Sara Ali Khan starts having fun with him. The video has been viewed more than 1.9 million times in just 2 hours. It is to be mentioned that the new song of this film ‘Mummy Kasam’ was released recently. The song has an excellent mix of the best voices of Udit Narayan, Monali Thakur and rapper ka ka Singh.

Sara Ali Khan and Varun Dhawan’s ‘Coolie No. 1’ is set to release on December 25 this year. The film is being directed by David Dhawan. The film is a 1995 coolie number one remake of Govinda and Karisma Kapoor, starring Paresh Rawal in the lead role. Apart from this, Sara Ali Khan will also be seen playing the lead role in the film Atrangi Re. A related video also went viral on social media, showing Sara and Akshay shooting together.