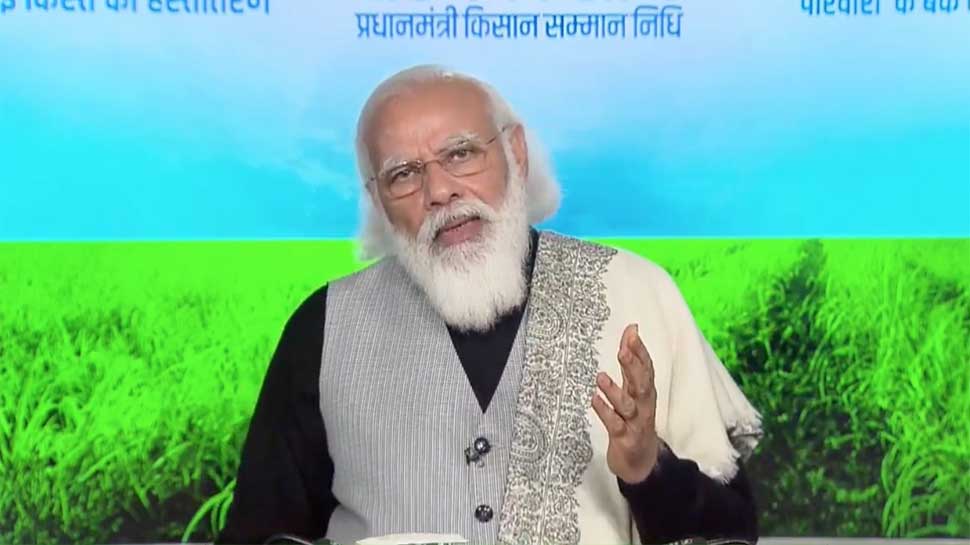 The Prime Minister has transferred Rs 18,000 crore to farmers’ accounts

Prime Minister Narendra Modi through video conferencing of the Prime Minister’s Kisan Sanman Nidhi Yojana (seventh installment) Rs. 18000 crore. Addressing the farmers, PM Modi said, “Today, in a single click, Rs 18,000 crore has been directly deposited in the bank accounts of more than 9 crore farming families in the country. Since the inception of the scheme, more than Rs 1 lakh 10 thousand crore has reached the farmers’ accounts.

Also read: Kisan Mall opened at Delhi’s Tikri Border, get all the essentials for free

‘Some people are doing politics in the name of farmers’

In his address, Prime Minister Narendra Modi, while targeting the opposition, said, “Some political parties have been democratically rejected by the people of the country, whatever they are doing today by misleading some farmers.” Despite repeated attempts of all this with a humble government they are not approving this discussion for some political reason.

The Prime Minister mentioned the APMC mandis of Kerala during his address and said that there is no APMC mandi. Taking a dig at the opposition political parties in Delhi, he said, “I ask these parties to do photography programs here, just agitate in Kerala and start APMC there.” You have time to mislead the farmers of Punjab, you do not have time to start this system in Kerala. Why are you taking a double policy? ‘

PM Modi targeted the Bengal government during his address. He said, “Today, I am saddened that more than 70 lakh farmers and brothers and sisters in West Bengal have not been able to avail this benefit. More than 23 lakh farmers in Bengal have applied online to avail the scheme, but the state government has stopped the verification process for so long. People are watching the politicians of selfishness very closely. The parties which do not speak in the interest of the farmers in West Bengal are engaged in harassing the citizens of Delhi in the name of the farmers here, they are engaged in ruining the economy of the country.

Addressing the farmers, PM Modi said, “Happiness in the life of farmers increases in the life of all of us. Today is a very holy day. Along with the honor fund that the farmers have received today, it has become a confluence of many occasions even today.

PM Modi first spoke to Gagan Paring of Arunachal Pradesh. Meanwhile, the Prime Minister asked where do you use the money of Kisan Sanman Nidhi Yojana. After this, Gagan said he uses his money in organic farming. “446 farmers are associated with me and we grow organic ginger,” he said. We sold the crop in the markets of Bangalore and Delhi. After this, PM Modi asked if buyers buy ginger from you that they take your land. After this, Gagan said, Sir, our land is safe. Then PM Modi said that some people are spreading rumors in the country that the land will be taken away.

Talking to PM Modi, Odisha farmer Naveen was briefed on the benefits of Kisan Credit Card. “I got a Kisan credit card in 2019 and it gives me a loan at 4% interest,” Naveen said. I used this money to buy paddy seeds, fertilizers and pesticides. “Earlier I had to take a loan at 20 per cent,” he said.

At the outset of the program, Union Agriculture Minister Narendrasinh Tomar said that in just two hours, Rs 18,000 crore would be sent to nine crore farmers’ accounts, which would go directly to their bank accounts. He, meanwhile, targeted West Bengal, saying all farmers except Bengal were benefiting from the scheme. Narendrasinh Tomar said there are about 70 lakh farmers in Bengal who will have to transfer Rs 4,200 crore, but the Bengal government has not taken any decision. The Bengal government should take a decision in this regard.

MSP will not end on any face: Rajnath Singh

Addressing Kisan Chaupal in Dwarka, Delhi, Defense Minister Rajnath Singh said, “Farmer brothers, I promise you that MSP will not end under any circumstances. The Modi government has bought MSP 3 times more than the UPA government. He said, ‘I respect the farmers sitting on the picket. Once the law is enforced, if it is damaged, I will correct it myself. With this Rajnath Singh appealed to the farmers to come again for negotiations. “Even if the farmers want to come and negotiate with the experts, come,” he said.