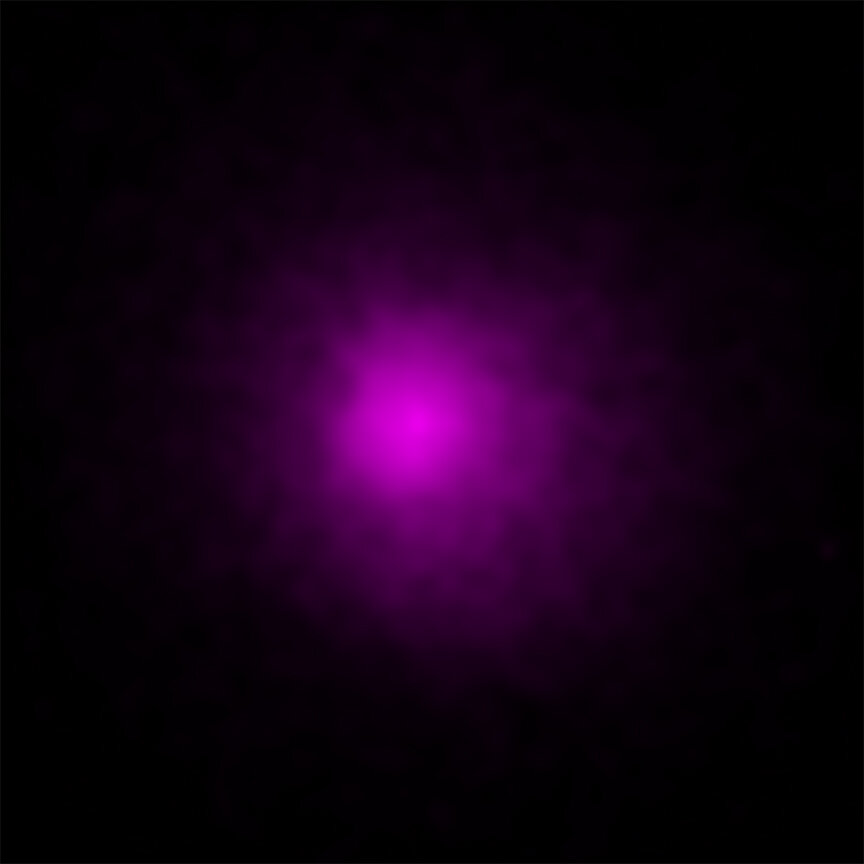 The mystery surrounding the whereabouts of a supermassive black hole has deepened.

Despite research with NASA’s Chandra X-ray Observatory and Hubble Space Telescope, astronomers have no evidence that a distant black hole estimated to be between 3 and 100 billion times the mass of the Sun can be found.

This missing black hole is supposed to be in the huge galaxy at the center of the galactic cluster Abell 2261, which is about 2.7 billion light-years from Earth. This composite image of Abell 2261 contains optical data from Hubble and the Subaru Telescope showing galaxies in the cluster and in the background, and Chandra X-ray data showing hot (pink colored) gas pervading the cluster. The central part of the image shows the large elliptical galaxy in the center of the cluster.

Using Chandra data obtained in 1999 and 2004, astronomers had already searched the center of the large central galaxy of Abell 2261 for signs of a supermassive black hole. They looked for material that overheated as it fell towards the black hole and produced X-rays, but found no such source.

Now, with new and longer Chandra observations obtained in 2018, a team led by Kayhan Gultekin of the University of Michigan at Ann Arbor has conducted a deeper search for the black hole at the center of the galaxy. They also considered an alternative explanation, in which the black hole was ejected from the center of the host galaxy. This violent event could be the result of the merging of two galaxies to form the observed galaxy, accompanied by the central black hole in each galaxy merging to form a huge black hole.

When black holes merge, they produce ripples in spacetime called gravitational waves. If the enormous amount of gravitational waves generated by such an event were stronger in one direction than in another, the theory predicts that the new, even more massive black hole would have been sent away from the center of the galaxy in the opposite direction. . This is called a retracting black hole.

The galaxy at the center of Abell 2261 is an excellent cluster for finding a retracting black hole because there are two indirect signs that a merger between two huge black holes may have taken place. First, data from Hubble and Subaru’s optical observations reveal a galactic core – the central region where the number of stars in the galaxy at any given point in the galaxy is at or near the maximum – which is much larger than expected. for a galaxy of its size. The second sign is that the densest concentration of stars in the galaxy is more than 2,000 light-years from the galaxy’s center, which is surprisingly distant.

These features were first identified by Marc Postman of the Space Telescope Science Institute (STScI) and collaborators in their previous images of Hubble and Subaru, and led them to suggest the idea of ​​a fused black hole in Abell 2261. During a merger, the supermassive black hole in each galaxy sinks towards the center of the newly coalesced galaxy. If they are linked to each other by gravity and their orbit begins to shrink, black holes are expected to interact with surrounding stars and eject them from the center of the galaxy. This would explain the large core of Abell 2261. The off-center concentration of the stars could also have been caused by a violent event such as the merger of two supermassive black holes and the subsequent recoil of a single larger black hole that results.

While there are hints that a black hole merger took place, neither Chandra’s nor Hubble’s data showed evidence for the black hole itself. Gultekin and most of his co-authors, led by Sarah Burke-Spolaor of West Virginia University, had previously used Hubble to search for a cluster of stars that could have been carried away by a retreating black hole. They studied three groups near the center of the galaxy and examined whether the motions of the stars in these groups are high enough to suggest that they contained a black hole of ten billion solar mass. No clear evidence of a black hole was found in two of the groups, and the stars in the other were too faint to produce useful conclusions.

They also previously studied the observations of Abell 2261 with the NSF’s Karl G. Jansky Very Large Array. Radio emission detected near the center of the galaxy showed evidence that supermassive black hole activity occurred there 50 million years ago, but does not indicate that the galaxy’s center currently contains such a black hole.

They then turned to Chandra to look for material that overheated and produced X-rays as it fell towards the black hole. Although Chandra’s data revealed that the densest hot gas was not in the center of the galaxy, they did not reveal any possible X-ray traces of a growing supermassive black hole: no X-ray source was found at the center of the galaxy. cluster, either in any of the star clusters, or at the site of the radio emission.

The authors concluded that either there is no black hole in any of these locations, or that it is dragging the material too slowly to produce a detectable X-ray signal.

A paper describing these findings has been accepted for publication in a journal of the American Astronomical Society and is also available online at arxiv.org/abs/2010.13980.

Image: size of the black hole captured at the center of the Milky Way

This document is subject to copyright. Aside from any conduct that is correct for private study or research purposes, no part may be reproduced without written permission. The content is provided for informational purposes only.