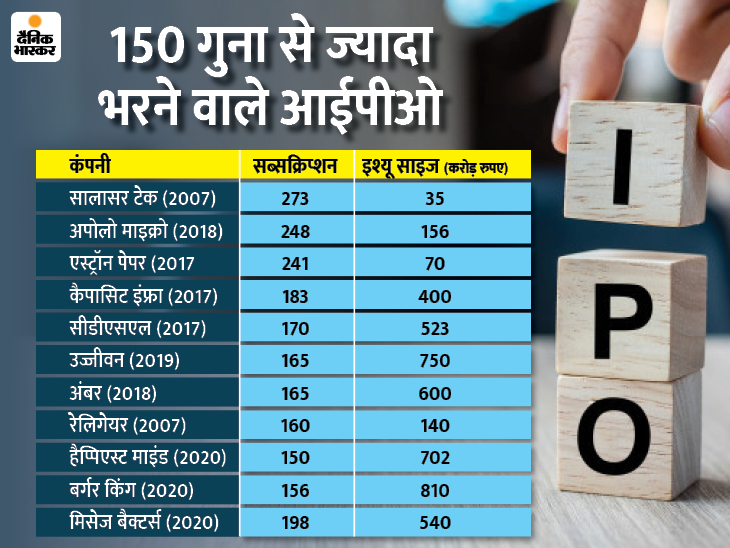 Mrs. Bakers’ IPO is 197.95 times on the last day. This is the highest in the last three years, while this is the first IPO of the year to receive a record subscription. The company’s IPO is closing today. The list will now be in the last month of December.

In this IPO, High Networth Individual (HNI) has a stake of 620 times while Qualified Institutional (QIB) has a stake of 176 times. The retail share is 29 times and the workforce is 45 times. Let us know that Mrs. Becter’s IPO was opened on Tuesday to raise Rs 500 crore. The premium of this premium biscuit company was completed on the very first day. On the first day the retail portion was 8 times full.

This was the seventh IPO of the year, which was fully filled on the first day. The company raised Rs 162 crore from Anchor Investors. The company supplies the same Burger King material that has recently been sold to investors. Coming at Rs 60, the stock was 156 times full and today it is Rs 219. However, it has since declined 10% to close at Rs 179.

The IPO has reserved shares of Rs 50 lakh for eligible employees. There is a discount of Rs 15 for employees. This IPO was just two steps away from a 200-time subscription.

15th IPO of the year

The first day of 2020 is Mrs. Bactro’s 7th IPO in terms of total subscriptions. Previously, Happy Minds Technology’s IPO was 2.86 times. Also, it was the first IPO of the year, which was fully filled on the first day. Apart from this, the IPO of Camcon Specialty Chemicals 5.18 times, Root Mobile, Mazagaon Dock Shipbuilders, Likita Infrastructure and Burger King IPO were also subscribed on the first day.

These IPOs are the most filled