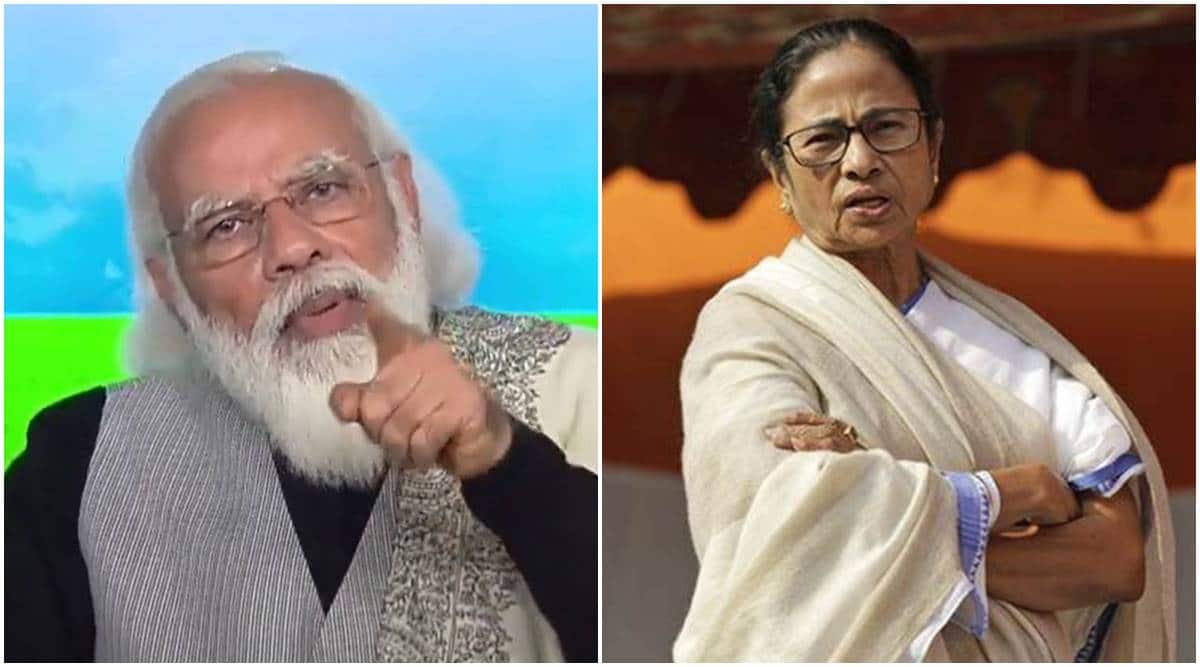 During his interaction with farmers from six states On Friday, Prime Minister Narendra Modi lashed out at the Mamata Banerjee-led government in West Bengal saying its ideology destroyed the state and was engaging in politics by preventing more than 70 lakh farmers in the state from benefiting from the flagship PM- KISAN’s Center scheme under which Rs 6,000 are provided annually. Assembly elections will be held in West Bengal in a few months.

Prime Minister Modi also wondered while there were unrest against the new agricultural laws, no protest was visible against West Bengal’s decision not to implement the PM-Kisan scheme.

“About 70 lakh farmers in West Bengal are not benefiting from this program, which is fully funded by the Center. Bengal is the only state that does not allow the benefits of the programs to reach farmers. Mamata Banerjee’s government has destroyed West Bengal, they are making politics by blocking the benefits for their farmers. His actions against the peasants hurt me a lot. Why is the opposition calm about this? “PM Modi asked.

Modi said more than 23 lakh farmers in West Bengal have applied online to take advantage of this scheme, but the state government has stopped the verification process for so long. “If you listen to Mamta Ji’s 15-year speech, you will know how much this ideology has ruined Bengal,” he said.

The prime minister said everyone knows how the state has been ruined by the political ideology of those who have ruled it for decades. “The public is watching very closely those who engage in selfish politics. The parties that do not speak for the benefit of West Bengal farmers are committed to harassing the citizens of Delhi here in the name of the farmers and are ruining the country’s economy, ”he added.

Slamming the Kerala government for joining the farmers’ protest, Premier Modi said: “Those who have been ruling Kerala for years are joining Punjab farmers for selfies, but they are doing nothing for the messaging system in their state. “.

“The groups that talk about mandis, APMC, are the ones that destroyed West Bengal, Kerala. There are no APMCs and mandis in Kerala. So why are there no protests in Kerala? Why don’t they start a movement there? But they are only misleading Punjab farmers, “he added.

Under the PM-KISAN program, a financial benefit of Rs 6,000 per year is provided to small marginal farmers, payable in three equal installments of Rs 2,000 each. The fund is transferred directly to the bank accounts of the beneficiaries.

In an interaction with farmers in six states on Friday, Prime Minister Narendra Modi targeted the opposition for “promoting a political agenda” by “spreading myths and lies” about new agricultural laws. “Some parties are pushing a political agenda by opposing the new agricultural laws. Some people are spreading myths and lies that land will be stolen if farmers go into contract farming, ”he said.

Ways that tries to mislead people with distorted facts: Mamata on PM-KISAN in Bengal

Meanwhile, Banerjee on Friday accused Prime Minister Modi of attempting to mislead people with half-truths and distorted facts about the failure to implement Prime Minister Kisan Samman Nidhi’s scheme in the state. He said Modi has shown his apparent concern for farmers through a televised address, instead of working proactively to solve their problems. “While he (Prime Minister Modi) has publicly stated his intention to help West Bengal farmers through his Prime Minister Kisan Yojana and supports the state government’s lack of cooperation, the fact is that he is trying to mislead people with the half truth and distorted facts, “Banerjee said in a statement.

He said his government has always been ready to cooperate in the interest of farmers. Claiming that he wrote twice to the Union’s agriculture minister and even spoke to him two days ago, Banerjee said: “They refuse to cooperate and instead indulge in malicious propaganda for political gain.”

The prime minister said that when the state is implementing so many programs with the central government, the accusation of not cooperating with a program that benefits farmers seems absurd.

His party, the Trinamool Congress (TMC), also accused the Center of attempting to mislead West Bengal farmers by repeatedly accusing the state government of depriving them of cash benefits under the “PM Kisan Nidhi Samman” program. “The BJP repeatedly states that West Bengal farmers are being deprived of money through this program. That’s not true. Prime Minister Mamata Banerjee had asked the Center to channel cash benefits through the state government and not directly to farmers. “The intention of the Modi government is to reap political advantages,” TMC MP Sougata Roy told reporters.

Roy also said that the new agricultural laws will help companies and introduce contract farming to the country.