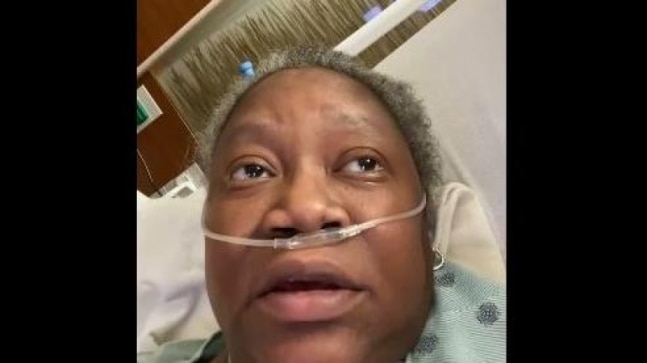 Her voice was strained and she had some difficulty breathing as she lay on her hospital bed and she recorded a video to narrate her experience at the hospital where she was admitted for Covid-19 treatment.

The black patient, Susan Moore, 52, suffered not only from the disease, but also from the “discriminatory” treatment she had been given by the white doctor who was attending her.

In the video, Susan Moore, a practicing physician in the United States, said the attending physician minimized her neck pain, refused to give her more pain medications, and instead suggested that she go home. He reportedly told her he was “uncomfortable” with giving her more narcotics.

“I was crushed. It made me feel like I was a drug addict,” the New York Times said in the video it posted on Facebook.

Dr. Moore said her being a licensed doctor wasn’t enough for her white doctor to treat her with respect.

“I submitted and argue that if I were White, I wouldn’t have to go through that,” he said in the video.

“I’m not short of breath. She doesn’t know why my neck hurts and she doesn’t feel comfortable giving me narcotics. All I can do is cry. I was in so much pain. She said you can just go. Home. right now. Note, he didn’t even listen to my lungs, he didn’t touch me in any way. He didn’t perform any physical exam. I told him you can’t tell me how I feel, “wrote Dr. Moore in a post on Facebook .

Soon after her video describing her experience went viral, Dr. Moore allegedly began receiving better care in the hospital and was subsequently discharged. She said the treatment following her complaint “treated adequately” her pain.

However, nearly two weeks after posting the video on Facebook, Dr. Moore died Sunday from complications related to Covid-19, his son Henry Muhammed said in the New York Times.

The discriminatory treatment suffered by Dr. More has brought to light another case of prejudice that black patients in the United States suffer during medical treatment.

Several studies conducted since the start of the Covid-19 pandemic have shown that people from minorities in Britain and the United States are disproportionately more likely to die from Covid-19 than their white counterparts.

Research published in the Journal of the American Medical Association revealed that mortality from Covid-19 was “substantially higher” among black and Latino patients than among white patients.

In Chicago, the infection rate was 925 per 100,000 black people compared to 389 among whites, according to an AFP report.

Meanwhile, Indiana University Health, where Dr. Moore was admitted, has released a statement saying it cannot comment on the matter due to privacy laws.

In the statement, as reported by the New York Times, the Indiana University Health System claimed to be an organization “committed to equity and the reduction of racial disparities” and that takes allegations of discrimination “very seriously and investigates every allegation. “.

“We support the commitment and expertise of our caregivers and the quality of care provided to our patients every day,” the statement said.

However, according to the Washington Post, the Indiana University Health System has now said it will implement “new anti-racism, anti-prejudice and civilization training for all team members.”

READ ALSO | Coronavirus, race and income: how the virus discriminates

READ ALSO | In Japan, the coronavirus pandemic leads to outbreaks of bullying, ostracism