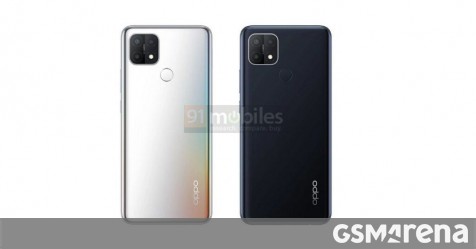 Oppo’s A15 was released in October and now the company is busy preparing the A15s for launch in India. We already know it will be priced at INR 11,490 and some of its specs. Now, although some official-looking print renders have been released, showing us the front of the phone for the first time, as well as all three color options.

The Oppo A15s will arrive in Rainbow Silver, Dynamic Black and White. The phone is expected to have a 6.52 “HD + touchscreen, 4GB of RAM and 64GB of storage. These details come from an official promotional poster. The fingerprint sensor is located on the back.

The design is very similar to that of the Oppo A15, with the screen having a teardrop notch and a rather substantial chin. It’s unclear what the differences between the A15 and A15 will be, aside from the amount of RAM / storage (the A15 maxes out at 3GB / 32GB). The rear camera setup is said to be identical, with a 13MP main snapper, a 2MP macro cam, and a 2MP depth sensor.

As some promotional materials have already come out, we expect the A15 to go official in India very soon, probably by the end of the month.