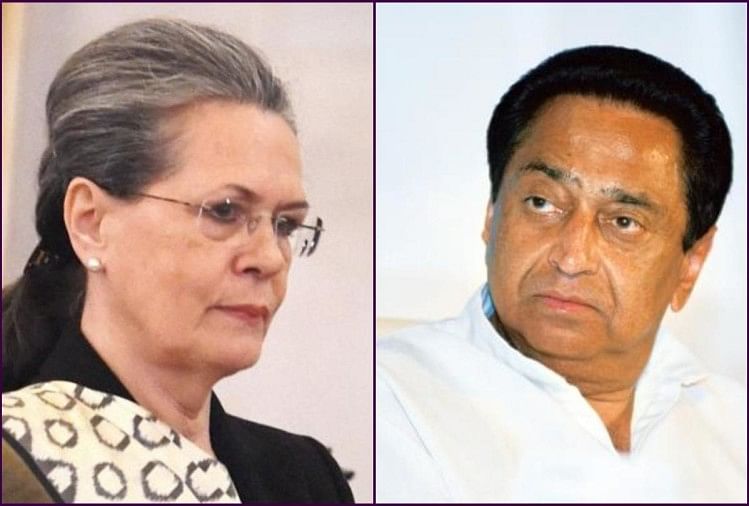 The Bihar elections have seen a resurgence of leadership in the party after the relatively poor performance of the Congress and subsequent inactivity in the party. It is reported that after Ahmed Patel’s demise, Congress president Sonia Gandhi has given him a new troubleshooter role, expressing confidence in former Madhya Pradesh chief minister and family loyalist Kamal Nath. Recently came to Delhi, Kamal Nath had met Sonia for a long time. He later met Congress general secretary Priyanka Gandhi. Sonia wants Kamal Nath to pave the way for the Congress to re-assign Rahul Gandhi soon.

It is said that Rahul Gandhi, who has so far insisted on putting non-Gandhi in the presidency, has now given up his stubbornness and is ready to take up the responsibility again. On the other hand, party sources said that he had written a letter to party president Sonia Gandhi, along with 23 other leaders, questioning the party’s leadership performance, as well as some other senior leaders who had not signed the letter. He wants to meet Sonia Gandhi. Sending a message in this regard, senior Congress leader and former Madhya Pradesh Chief Minister Kamal Nath recently met Sonia Gandhi and briefed her on the sentiments of other senior leaders and suggested talking to all.

Sources said that in this meeting Sonia Gandhi has handed over the responsibility to Kamal Nath that somehow all the senior leaders of the party, mainly the members of the Congress working committee, have agreed on the name of Rahul Gandhi as the next Congress president. After this, Kamal Nath also met some other senior Congress leaders regarding his conversation with Sonia.

In fact, fingers are being pointed at former President Rahul Gandhi’s style and fingers, not at Congress President Sonia Gandhi, who is disabled in Congress. Interestingly, the fingers of these people are being raised by those who have long considered 10 Janpath to be very credible and who have also influenced the decisions of the UPA government and the party for the entire ten years. There are also reports that efforts are underway to reach a consensus on the President soon in the upcoming Congress elections, but Sonia Gandhi and her loyalists want the consensus to be in the name of Rahul Gandhi, with the exception of one Jitendra Prasad. Times are made for Gandhi. But many senior leaders are wearing different types of shoes in Rahul’s name, which has added to Sonia’s woes.

Sonia Gandhi’s plight has been exacerbated by the fact that Ahmed Patel, who has been Sonia’s troublemaker for the last twenty years, is no more in the world and the Sonia family does not see a commander at present, which could create an atmosphere for Rahul Gandhi to continue handing over command of the party. That is why Sonia Gandhi has put her trust in Kamal Nath, an old loyalist and senior leader of the family.

An unnamed Congress spokesperson, speaking on condition of anonymity, said the anger within the party was so great that anyone could stand against Rahul in the elections and if Rahul Gandhi tried to impose any of his puppets, the party would collapse. . Sonia Gandhi knew that this was why she had put Kamal Nath ahead.

On the other hand, another veteran leader of Madhya Pradesh and former Chief Minister Digvijay Singh has openly supported Rahul Gandhi. Digvijay openly said that he wanted Rahul Gandhi to become party president again. Sources close to Digvijay also say that Raja Saheb is openly with Rahul Gandhi, but if there is talk of making someone else in Rahul’s place, he can also file his own claim and if the election is held, he can also contest the election. He will not just sue Rahul Gandhi or Priyanka Gandhi.

While there is no consensus on Rahul Gandhi’s name for the presidency on behalf of Group 23. Many leaders of this group are not satisfied with Rahul. But they have not yet been able to extend an alternative name. But former Union Minister and another senior member of Group 23, Anand Sharma, is also vying for the presidency. On the other hand, there is also talk that the bridge between ten Janpath families, loyalists and group 23 Kamal Nath is trying to gain acceptance of both camps by showing himself neutral.

According to sources, senior Congress leaders are continuing their meetings and meetings in their allied groups. In a similar meeting held at the residence of Leader of the Opposition in the Rajya Sabha Ghulam Nabi Azad, the question also arose as to whose name would be given if Sonia Gandhi asked for a name of her choice for the post of Speaker after the meeting. A suggestion in this regard was also made in the name of Mukul Wasnik, but no name has been agreed upon yet.

According to the Group 23 leader, senior leaders want the non-Gandhi and senior Congress parties to take charge and if Priyanka Gandhi can be promoted from vice-president to general secretary like in the Jaipur session, Sonia Gandhi will be satisfied. In this, Rahul Gandhi was made the Vice President. So if all goes well in the future, the way to keep Priyanka’s post open.

At the same time, the senior Congress leader says that the situation that the Congress is going through needs the leadership of a leader who is just, fair and honest. On which Congress president Sonia Gandhi and Rahul Gandhi, Priyanka Gandhi can be trusted and other senior leaders of the party who have questioned the style of leadership can also be trusted. Because the crisis of mutual trust has cooled so much that if the leadership falls into the hands of a weak and one-sided, the party can go down from where it is.

The way the fingers were raised about the performance of the party leadership and then the other leaders were attacked by those who raised their fingers, it seems that the Congress is facing tremendous heat inside. True cancer is accomplished through that part of former US President Barack Obama’s book, in which Obama expresses his opinion about Rahul Gandhi. Now the question is whether Rahul Gandhi failed or failed. A young Congress leader in Team Rahul says that some senior leaders of the party knowingly left no stone unturned in failing Rahul Gandhi.

According to this young leader, the big leaders responsible for the plight of the party are questioning Rahul Gandhi today. While the truth is that if any leader has the most aggressive stance against the Modi government at this time, it is Rahul Gandhi. While all the other leaders have been silenced or have been silenced and instead of questioning or attacking the Modi government by barricading against their leadership and Rahul Gandhi, it is understandable who is behind all this.