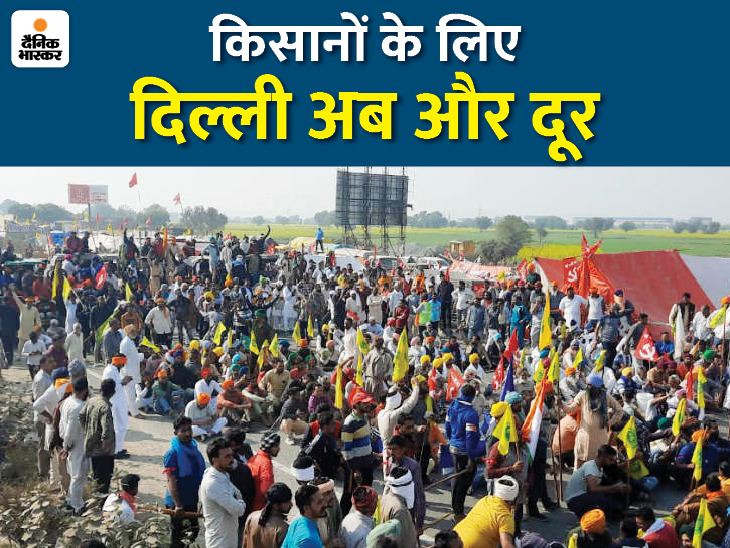 It is the Shahjahanpur Kheda border. If the farmers are unable to go to Delhi, the Haryana Police has also closed the second lane of the highway. The force has also put a large number on the border.

Farmers’ agitation has intensified on the Shahjahanpur-Kheda border in Alwar, Rajasthan. Haryana police also closed the second lane of the Jaipur-Delhi highway at 2 pm on Friday in view of the growing number of protesters and the possibility of farmers traveling to Delhi. Farmers on the Shahjahanpur border have been stuck on the highway since December 12. So far only the lane from Jaipur to Delhi was closed. On Friday afternoon, Haryana police also barricaded the Delhi-Jaipur lane of the highway. The vehicles have been diverted to the acacia. In such a situation, both the highways on the border have been closed.

Haryana Police also barricaded the second lane of the highway.

The peasant agitation spreads for about two kilometers on the Jaipur-Delhi street. Farmers have tents and vehicles. At the same time, after the closure of the Delhi-Jaipur lane, farmers have also come into it. Rampal Jat, national chairman of the Kisan Mahapanchayat, said the government had deliberately closed the second lane of the highway. The farmers did not block the highway. Farmers could not travel to Delhi, so barricades have been set up at the Shahjahanpur Kheda border.

MP Beniwal said that two lakh farmers will come on the 26th
MP Hanuman Beniwal said he would arrive at the Shahjahanpur-Kheda-Haryana border on December 26 with two lakh farmers. He also held a public meeting in Jaipur on Thursday in this regard. In such a situation it is feared that they may reach the border with a large number of farmers on Saturday. It is believed that the situation could worsen, so as a precaution, Haryana police closed the highway a day ago.

The farmers came to this road after blocking the second lane on the National Highway.

Police are deployed in three circles
More than 1,500 police and armed forces personnel have been deployed in Haryana from the Shahjahanpur border so that farmers cannot move on from here. Farmers, on the other hand, are now on the road on both sides. Police are spotted at the border on one side and farmers, their tents and vehicles on the other. The situation is that not a single vehicle can come and go towards Delhi.

In Shahjahanpur on one side of the border the farmer is seen as a farmer and on the other side the police are spotted.

Farmers also arrived from Mumbai
A large number of farmers reached the border from Mumbai on Friday. A large number of Jat community farmers came from Alwar and surrounding districts. At the same time, farmers and ordinary people associated with the Ahir army have also reached out. Due to this, the Haryana government had already put up barriers on Friday so that the farmers could not go ahead.

Big leaders also started coming to Alwar
Shahjahanpur Kheda The peasant movement on the Haryana border has begun to move fast. Seeing this, the attitude of the big leaders of the state and the center has also moved forward here. On Friday, Rajya Sabha MP Bhupendra Yadav presided over a farmer on Kishang Bas Bas Road in Kherthal. At the same time, former MP Dr. Karan Singh Yadav met farmers in Behror against agricultural laws. MP Hanuman Beniwal is also preparing to show his strength with the farmers of Alwar.