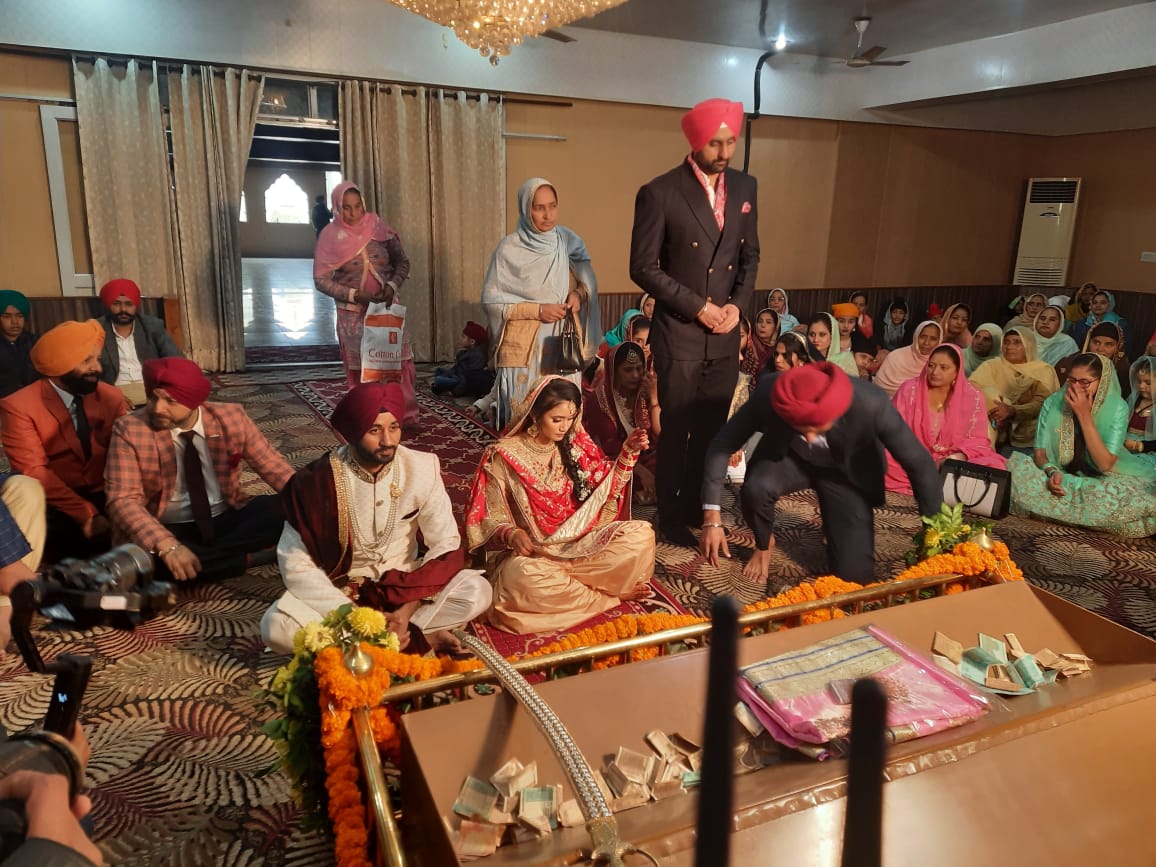 Indian hockey team captain Manpreet Singh has tied the knot today. He did seven rounds with Ili Sadiq, who lives in Malaysia, at Gurudwari Sahib in Guru Tegh Bahadur Nagar in Jalandhar. His future wife Eli’s name is Punjabi Navpreet Kaur. Their wedding ceremonies have been limited due to Corona. Manpreet Singh is originally from Mittapur in Jalandhar.

Indian hockey captain Manpreet Singh met Ili Sadiq in the 2012 Sultan Johf Johar Cup in Malaysia. At the time, Manpreet Singh was leading the Indian junior hockey team. Eli Sadiq came to watch the match. He has been a big fan of Manpreet ever since.

Hockey captains Manpreet Singh and Ili Sadiq during the Anand Karja at Gurudwari Sahib in Jalandhar.

Love not to meet at first sight

It is often seen that there is friendship between a boy and a girl, then there is a little harmony, then there is love somewhere, but there is a direct entry of love between Eli and Manpreet. In 2012, Manpreet Singh Sultan went to Malaysia to play the Johor Cup. This is how he met Ili of Pakistani and Malaysian descent. After this, Manpreet returned to India but the love between the two grew. Eli had visited India several times and Manpreet had also visited Malaysia several times. During this Asia Cup, Eli was also present at the stadium.

Took a mobile number from the officer

The expression of love between the two was Manpreet’s. Manpreet took Eli’s mobile number from an officer on duty at the stadium during the Sultan Johar Cup. He then met Eli. When they both met, for the very first time, Manpreet told Eli without knowing his heart more. She gladly agreed.

Manpreet Singh, captain of the Indian men’s hockey team, was named the International Hockey Federation’s (FIH) Player of the Year a few months ago. Manpreet was the first Indian to receive the award since its inception in 1999. Manpreet had the highest number of votes at 35.2 per cent.

Arrived by train at No. 7

On the question of adding important chapters to life, hockey captain Manpreet Singh said it feels very good. Our wedding dates had changed many times and this time we thought we would get married after the Olympics but Covid-19 had to change the wedding date many times. Even this time, we have maintained the caution associated with Kovid. Many people could not be invited to the wedding, but once the situation improved, they would hold another ceremony. Indian hockey captain Manpreet Singh said their relationship had been going on for 9 years. Now it feels good that they are married.

Indian hockey captain Manpreet Singh has promised to gift his wife a Range Rover car after winning the Olympics in Tokyo. He praised his wife Eli and said that so far he has always supported her. They will also get full cooperation in the upcoming matches. He said mom would take care of Eli and he would focus on the game. His wife will also start her own business.

Hockey captain Manpreet Singh said that the Indian hockey team is fully prepared for the Olympics. For this, there is ongoing practice in CAP. He has also recently returned from camp and is taking care of the fitness level of all the players there. The Indian team aims to win gold in hockey at the Olympics. So they are not estimating any team. During training, take a closer look at the strategies and games of all the teams and understand them. He said that to win the Olympics, athletes must maintain consistency in their performance. Apart from this, we are focusing on the attacking game so that every opportunity can be turned into a goal.