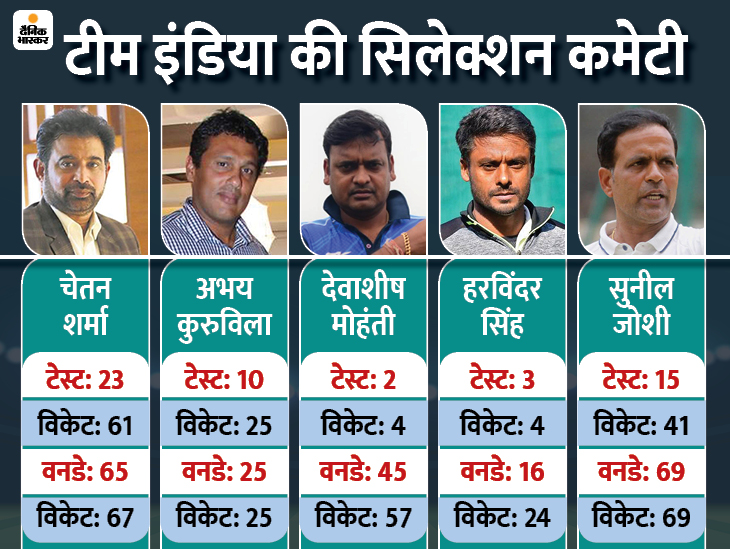 The Board of Control for Cricket in India (BCCI) on Thursday announced the names of three new members of the senior national selection committee. These are Chetan Sharma, Abhay Kuruvilla and Devashish Mohanty. Sunil Joshi and Harvinder Singh are already on the committee. Now call it a coincidence or something that all five selectors are bowlers and have all played for India.

The committee has 4 pace bowlers, including chief selector Chetan Sharma. Sunil Joshi is a spinner. Speaking of everyone’s experience, Chetan has played a maximum of 23 Tests between them. All have played a total of 53 Tests. The new selection committee will select the team for the home series against England in February next year.

Another coincidence
Look at another interesting combination. Indeed, the new selection committee has been selected by the Cricket Advisory Committee (CAC). It has 3 members. Two men and one woman. Madan Lal and RP Singh have been fast bowlers. The female member Sulakshan Nayak has been the wicketkeeper. The CAC interviewed 11 people for the selection of 3 new members of the Senior National Selection Committee.

Chetan Sharma is the first bowler to take a hat-trick in the World Cup
Chetan played 23 Tests and 65 ODIs in his 11-year international career. He is also the first hat-trick bowler of the World Cup. He won the honor against New Zealand in the 1987 World Cup. At the age of 16, Chetan started playing first class cricket from Haryana. In December 1983, he made his ODI debut against the West Indies. He took 61 wickets in Tests and 67 in ODIs.