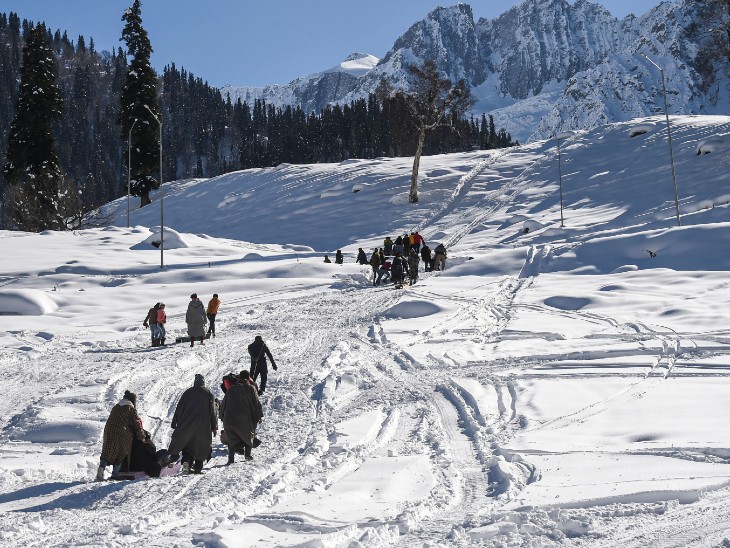 The temperature in Kashmir has dropped to minus one. In Sonmarg, people pass through snow-covered roads.

The cold is now steadily rising. The meteorological department has issued an orange warning for the cold wave in Rajasthan and Punjab. This warning is issued when the temperature is 2-4 degrees below normal. Temperature minus 1.5 in Chandan area of ​​Jaisalmer, Rajasthan last night. Was 1.5 (-). It is snowing continuously in Kashmir. Due to minus temperature, snow has also started accumulating in many parts of Himachal.

The photo is of Sonmarg in Kashmir. Tourists ride on ice.

The photo is of Mount Abu. When people woke up, they found snow in the trains.

The night temperature in Chittorgarh dropped to 7 degrees. Because of this, dew drips into the ground.

Delhi: Temperature 3 degrees
The temperature in Delhi has been falling steadily. 3 degrees is recorded today. According to the meteorological department, there is a possibility of some relief from the cold from December 20. Temperatures could rise by 2-3 degrees after Sunday.

Snow settled on a bush near the Shimla-Dhali bypass.

Punjab: Coldhar will last for next 48 hours
The whole state is a cold front. The Meteorological Department has issued a cold wave warning for the next 48 hours. Winter will intensify in the coming days due to snowfall in the mountains. 10 trains running from Amritsar have been canceled till February due to fog. For the next 2 days, Ludhiana will be shrouded in fog.

Chandigarh :: It will start melting, the night will be cold
Severe cold has increased people’s trouble. Cold winds are blowing. Nighttime temperatures could drop by 2 to 3 degrees, according to the weather department. There will be light fog in the morning for a few days, but it will not affect the visibility much.