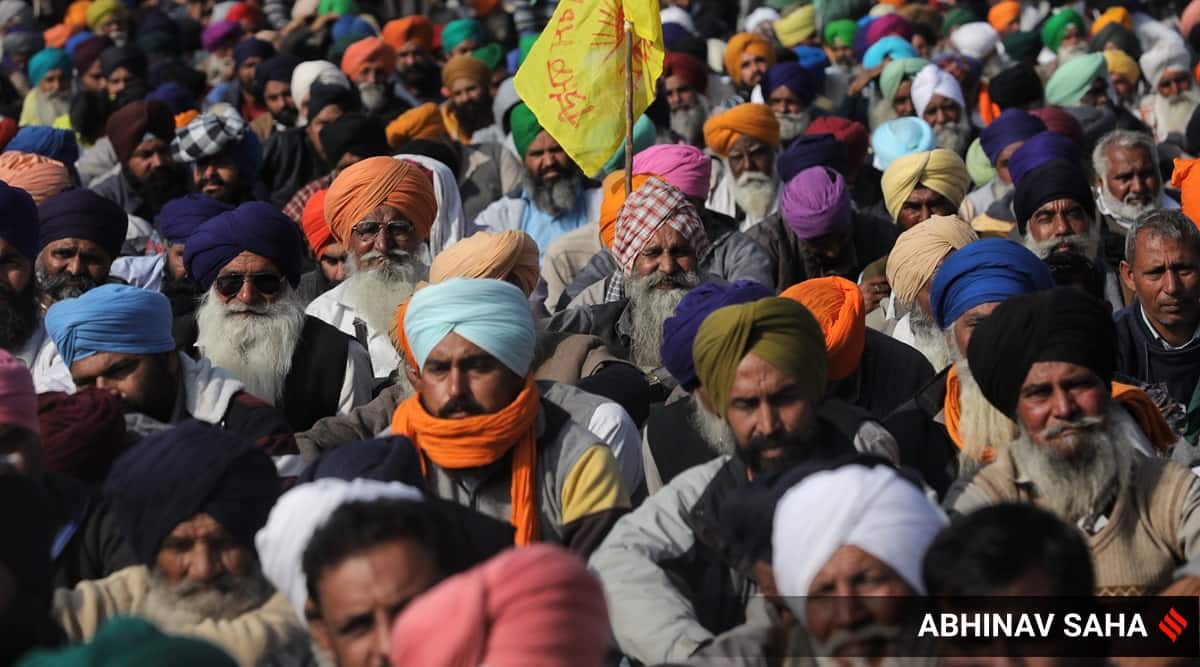 KK Venugopal as he listened to a series of petitions calling for the removal of farmers who organized a sit-in on the Delhi border against the new agricultural laws.

Not everyone in Singhu is there for the long haul. Although thousands of farmers settle on the borders of Delhi, there are hundreds of people from and around Delhi who are making one-day visits to take part in – or just witness – the agricultural protest. While some say they want to see history in the making, others are more involved, sitting and chanting slogans alongside farmers and attending seva in numerous langars before heading home in the evening.

Satpal Singh slowly crosses the main stage with his two-year-old grandson in his arms. He continues to point out the various stalls set up for the protest while the boy listens rapt.

“I think the farmers are right: if the government doesn’t listen to them, they could end up being slaves to the companies. This is a major protest and they have our support. Today is my first day here and my family and I will keep coming back whenever we can, ”said Satpal, a businessman from Tilak Nagar, who was accompanied by 15 other family members.

During the day, several families from Delhi, Sonipat and Panipat joined the crowd as speeches continued to echo from Singhu speakers. While some arrive in their vehicles, which park on the Delhi side of the police barricades, others use subways and cars to reach them. In some WhatsApp groups of families and colonies, the messages are spread so that people can visit in large groups.

“I asked my daughters to take leave of their office and visit the protest because we don’t want to lose being part of the story. Our family also has farms in Amritsar, so we understand… From the atmosphere here, you can tell that they won’t move until the laws are repealed, ”said Surinder Kaur of Janakpuri.

Many visitors can be seen walking to the end of the protest to get an idea of ​​how big it is, while some children diligently write slogans on the posters to be posted on the sides of the tents.

About 2km from the police barricades, a family of eight walks towards the stage. Gurkirat, seven, cannot contain his excitement seeing the big tractors on the road. “He was particularly excited to visit the protest. We remain on the Haryana side of the border and are planning to visit it regularly. Sometimes we also take part in seva. Serving the farmers is like doing God’s work, ”said Manjeet Kaur, who remains close to the Panipat refinery.

For all the latest Delhi news, download the Indian Express app.