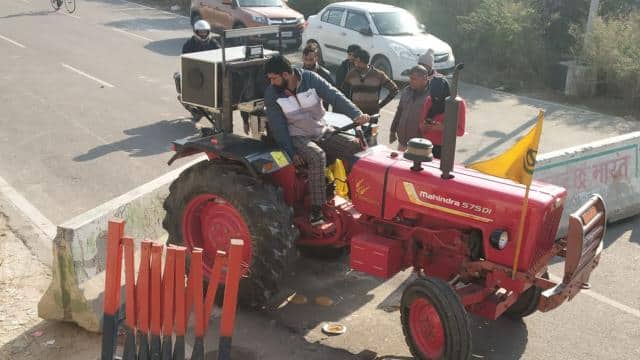 The agitation of the resolute farmers demanding the return of new agricultural laws continues on the 23rd even today. Peacefully farmers on the borders of Delhi are demanding the government to repeal these laws as soon as possible. Strict security arrangements have been made at the Singhu border. Farmers say we will go if the central government calls for talks. The Supreme Court has said sit quietly, we are sitting here peacefully. The court said the case should be started. We haven’t talked in the last 8 days. We are ready to negotiate. At the same time, it has been made clear by the government that the law will not be repealed, but that an amendment is possible.

Ghaziabad: Farmers remove service lane barricades from tractors. The road coming from the elevated road above the UP gate has been barricaded two days ago.

Shravan Singh Pandher, general secretary of the Kisan Mazdoor Sangharsh Samiti, said that the formation of the committee was not a solution to the problem, even before the farmers refused to form a small committee. Tomar Ji’s letter written yesterday has confused the nation, there is nothing new in it. If something new had happened, we would have commented on it.

Forming a committee is not the solution to the problem, even before the farmers refused to form a small committee. Tomar Ji’s letter written yesterday has confused the nation, there is nothing new in it. If something new has happened, we will comment on it: Shravan Singh Pander, General Secretary, Farmers Labor Struggle Committee #FarmLaws pic.twitter.com/lFE0PAINjH

– Farmers continue to protest against agricultural laws on the Singhu border. “We do not trust the committee formed by the Supreme Court,” said Dayal Singh of the Kisan Mazur Sangharsh Samiti, Punjab. If the government talks and withdraws the black law it is fine, otherwise we will not leave this front. The Prime Minister should talk to the farmers and withdraw the agricultural laws.

Farmers continue to protest against agricultural laws on the Singhu border. “We do not trust the committee set up by the Supreme Court. If the government withdraws the black law through negotiations, we will not leave this front,” said Dayal Singh of the Punjab Farmers’ Struggle Committee. pic.twitter.com/0VTUbAKWh7

Delhi: More tents are being set up at the Singhu border to protect protesting farmers from the bitter cold. “We have been preparing ourselves for a long time because our fight against black law will continue,” said one farmer. It’s getting colder now, so we’re putting up more tents.

Delhi: Protesting farmers on the Singhu border say they are arranging more tents to cope with the cold weather conditions.

“As our fight against black laws continues, we are preparing to stop for a long time. It is getting colder, so we are putting up more tents,” said one protester. pic.twitter.com/7Jd1yBccFP

– The farmers’ protest against the agricultural law on the Singhu border continues even today on the 23rd, during which strict security arrangements have been made at the border.

Farmers’ protest against the agricultural law on the Singhu border continues today on the 23rd, meanwhile, strict security has been put in place along the border. #farmersrprotest pic.twitter.com/R0JNupDXjK