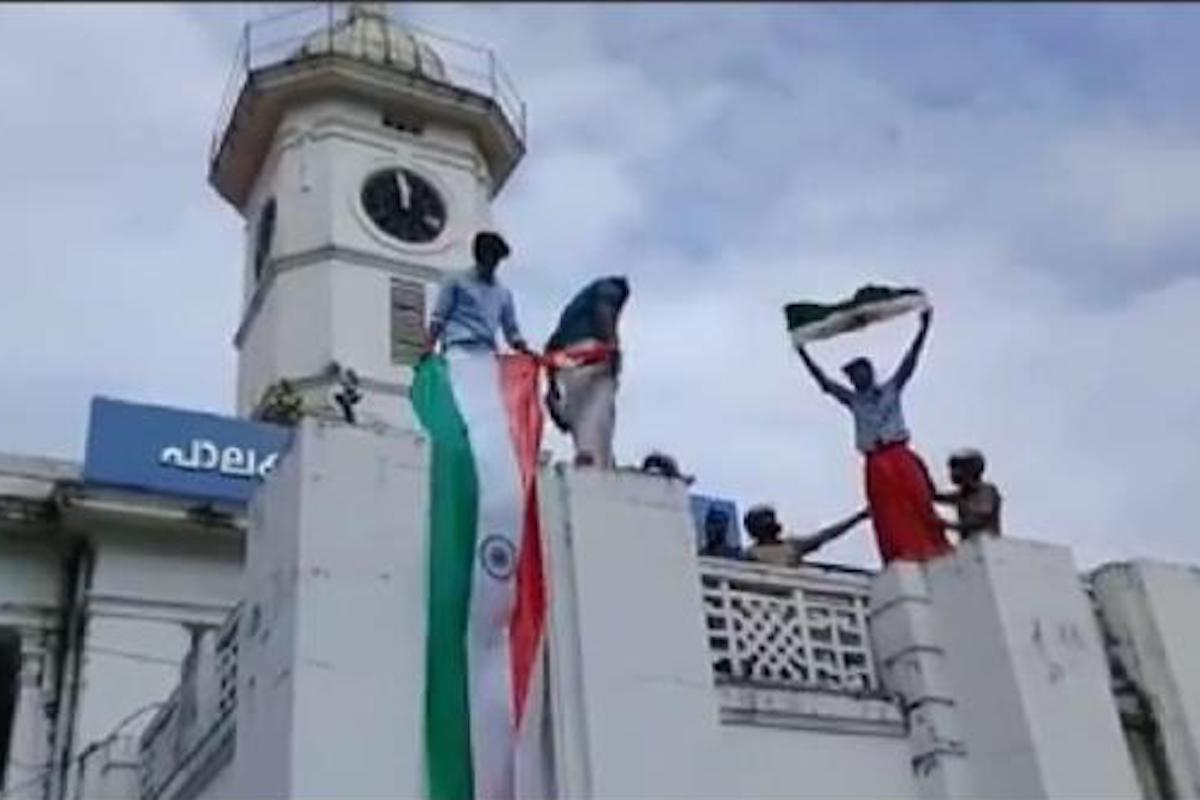 “Down with communalism. Long live secularism! It was the chants that ripped through the air outside the Palakkad Municipality office on Friday, as the DYFI (youth wing of the CPI (M)) marched to the office and unfurled the Indian tricolor from the building.

This was DYFI’s retaliation to the BJP for celebrating its victory in the municipality with a “Jai Shri Ram” banner on Wednesday. The BJP won 28 out of 52 seats in local elections and gained control of the municipality of Palakkad. To celebrate their victory, BJP executives hung banners of Amit Shah and Modi and an extra one with the words “Jai Shri Ram” in Malayalam from the top of the building on Wednesday. The celebrations quickly became controversial and he was widely condemned on social media for using a religious slogan in a government building after a video went viral.

The incident became even more controversial after BJP Secretary of State Sandeep G Varier posted a video of the celebratory demonstrations in Palakkad with a caption “Palakkad is the Gujarat of Kerala”.

On Friday morning, Palakkad police booked some BJP cadres allegedly responsible for the celebrations. Soon after, Palakkad’s DYFI cadres embarked on a demonstration at the municipality of Palakkad, raising slogans against communalism. Later, a tricolor flag was deployed from the same spot on the building from which the Jai Shri Ram banner was hung.

In a Facebook live video posted on the DYFI Palakkad page, the cadres could be seen marching with a banner saying: “This is not an RSS office, it’s a municipal office. This is not Gujarat but Kerala … DYFI marches towards the Municipality of Palakkad “.

“In the north, the BJP paints saffron in different places, hangs banners of Jai Shri Ram, posters of Ayodhya, places images of Sivaji and Golwalker everywhere and other common symbols wherever they have control. But this is Kerala, and this kind of celebration will not be tolerated by the secular people of Kerala, by the secular people of Palakkad, ”District Secretary DYFI TM Sasi told TNM.

Sasi also added that “just because the BJP won the municipality of Palakkad in the local elections, they cannot hang non-secular symbols in the area”. “This is an administrative center in a democracy and therefore we can only hang symbols of democracy. The communalization of the place, even if done by a religious majority or minority, will be strongly opposed,” added Sasi.

This is not RSS Karyalay, this is the municipal office.
This is not Guajarat, this is Kerala. pic.twitter.com/7eKOqAv4cg

In Palakkad, while Congress had won 13 seats last time, this year it was 1 seat lower than the previous election numbers, winning only 12. The LDF which had won 9 seats in 2015, this year has reduced to six seats.