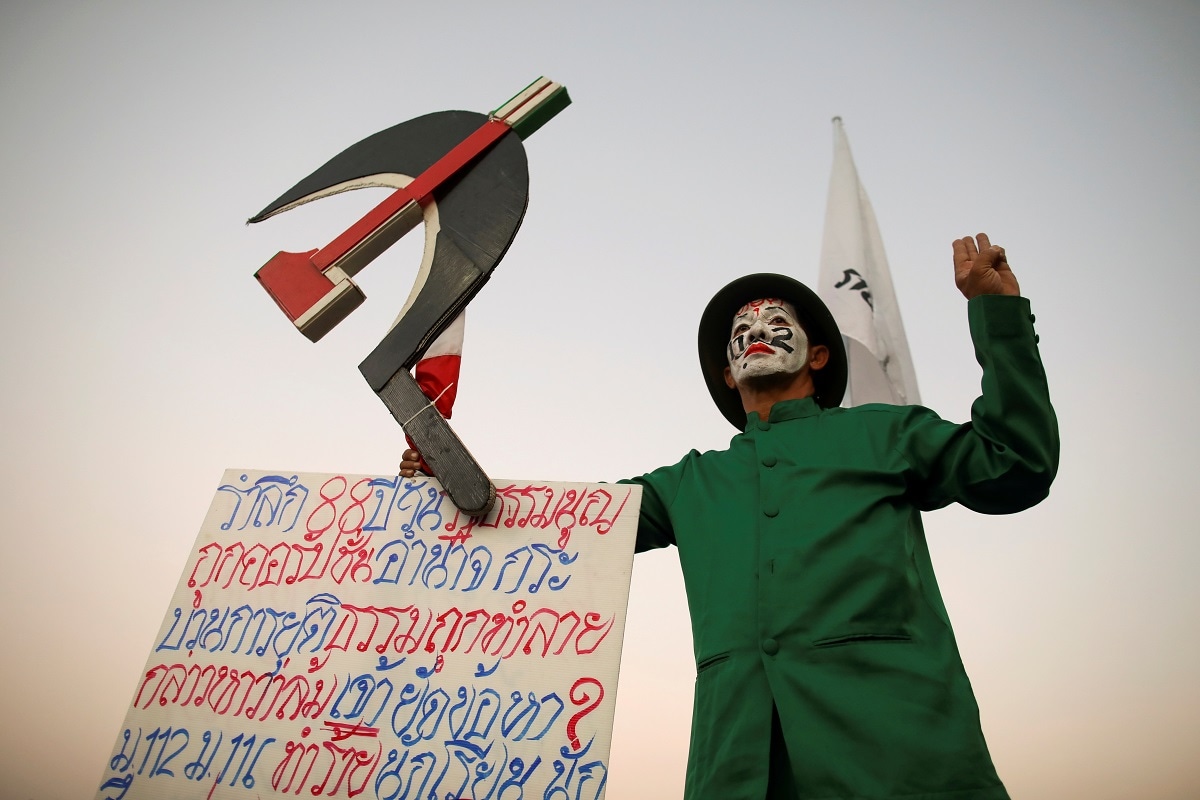 As they paraded into a Bangkok shopping mall in top to mock the king of Thailand, protesters made an incongruous spectacle amid the festive decorations.

They brought in silent looks, smiles and applause, but the few dozen activists were far short of the tens of thousands who joined previous anti-government protests that broke the taboo on criticizing King Maha Vajiralongkorn.

After months of street demonstrations that rocked the Thai establishment, the best-known figures in a movement that drew tactics and inspiration from the Hong Kong protests told Reuters they were at a critical moment.

There are disagreements over strategy, fatigue, dozens of accusations brought up in a monarchical backlash and now to coronavirus outbreak that could make mass gatherings difficult.

“I think most people are exhausted,” said Parit ‘Penguin’ Chiwarak, 22, who helped lead the crop top protest, noting that the exams at the end of the university term made it difficult for students to join. students.

“We will try again next year,” he told Reuters. “We won’t stop, no matter what.”

Government spokeswoman Rachada Dhnadirek said authorities were not against protesters expressing their views, but against an increase coronavirus

cases meant that at the moment there were not to be large gatherings for any reason.

The crop top protest, however, showed how far the discussion has moved in Thailand, with its defiance of the royal insults law, openly provoking a king who has been depicted wearing a crop top in European tabloids.

But divisions among the protesters have become more evident as they discuss how best to maintain their momentum next year to oust former junta leader and prime minister Prayuth Chan-ocha, to rewrite the constitution and to curb the powers of the king.

The main factions are the demonstrating students linked to Thammasat University, including Parit and Panusaya “Rung” Sithijirawattanakul, and the Free Youth group, which started the protests in July. Both have been allies, calling themselves the “People” movement.

But Parit and Panusaya, 22, have distanced themselves from the launch of Free Youth’s Restart Thailand movement, with a logo whose letters RT resemble a hammer and sickle.

Critics of Restart Thailand say it risks discouraging some people with apparent communist symbolism in a Southeast Asian country where a two-decade-long communist uprising ended in the 1980s.

“Many people are confused,” said protester Kent Ruqsapram, who carried a placard to an event that said “We fight for democracy, not communism” to make his point.

Meanwhile, Jutatip Sirikhan, 22, of Free Youth, said the group will focus on its campaign next year, despite its previous alliance with student leaders.

“We want to create more participation from all groups, whether they are workers, farmers or those who do not have access to social welfare,” he told Reuters.

It is not the first time that divisions have emerged and both groups claim they have the same goals of breaking the decades-long hold on power of the army and the palace.

“They both still go in the same direction, they just use different means,” said Arnon Nampa, 36, a human rights lawyer who said he wanted to step up the drive for reforms to the monarchy next year as he campaigns for change. keep it going.

“The longer it goes on, the more people will understand the problems and side with us – like water eroding rocks,” he told Reuters.

There is still little to show on the core demands.

Prayuth has rejected the demands for resignation, the discussion on the constitution will proceed only on government terms, and the Royal Palace is promoting a public relations campaign rather than entertaining any possibility of change.

“The protests are weakening,” Warong Dechgitvigrom, 59, of the Thai Pakdee royalist group, told Reuters. “The government can simply let the movement die on its own.”

Realists are behind a wave of treason charges against protest leaders – with a coordinated effort described by Warong to bring police complaints on charges that can lead to 15 years in prison.

Anyone can bring such a real insult complaint. The motifs included everything from using the king’s words disrespectfully to dressing in clothes that parody the royals.

At least 35 activists now face allegations of treason, many of them multiple, according to data from Thai Lawyers for Human Rights: Parit alone suffers eight. Total charges against all activists are now hundreds, including sedition, cybercrime, illegal assembly and mockery coronavirus

“It can drain a lot of time, resources and energy,” said Ruangprapaikitseree of Tattep ‘Ford’, 23, who faces six charges, including treason and sedition. “It would be a lie if I said that sometimes I haven’t lost heart.”

Like other prominent protesters, he is not currently detained but is under police investigation to see if there is sufficient evidence for trial.

, with hundreds of cases reported among migrant fish workers – a discouragement at mass gatherings if not the complete blockade the country went through in early 2020.

“We fought during the pandemic and we did it without spreading the virus,” Parit said. “We can do more online.”

As in Hong Kong, online mobilization has been a hallmark of youth-led demonstrations in Thailand.

Demonstrating enough support to force change in the real world, however, is a bigger challenge. The provincial elections on December 20 largely returned establishment politicians despite being challenged for the first time by a movement with the support of young people.

And the reaction of the Royal Palace is increasing.

King Vajiralongkorn, 68, has begun an intense PR counter offensive with Queen Suthida, 42, as the driving force behind the campaign during visits to Thailand.

Sometimes spoken to crowds, sometimes signed on actual images, the mantra is that of national unity under the monarchy, whose power and prestige were strengthened during the seven-decade reign of the monarch’s late father, King Bhumibol Adulyadej.

“The monarchy and the people are inseparable,” the king told the crowd at a recent stop.

And while the numbers have rarely been as large as the tens of thousands who have joined the protests, the appearances are televised every night on the royal television newscast that remains popular with older Thais.

“This has won them many hearts and minds,” said Termsak Chalermpalanupap, a visiting fellow at the ISEAS-Yusof Ishak Institute in Singapore.

Having been absent in Europe for most of 2020, the king’s return to Thailand in October marked the start of an intense round of appearances. A Reuters tally showed over 40 events, including more than a dozen in which the king spoke individually to members of the public – previously unheard of.

For the protesters this is also a sign that they are having an impact and must move forward even if it takes years.

“The fire has taken. It will continue to burn,” he said.