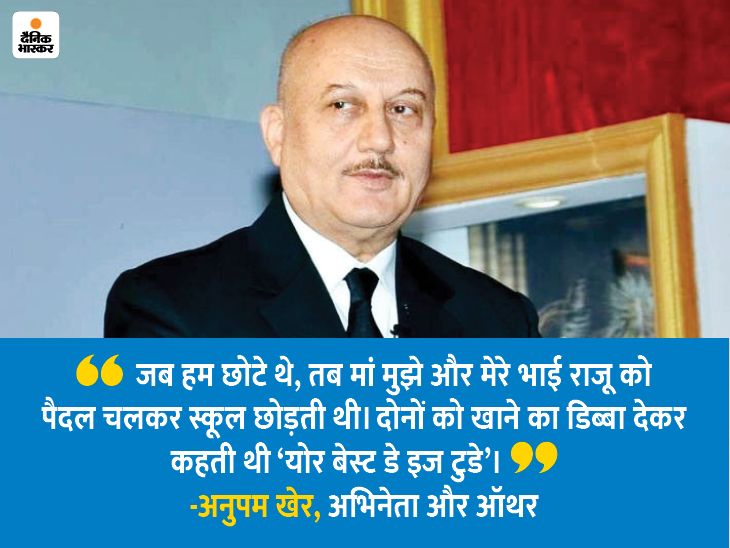 Actor Anupam Kher’s new book ‘Your Most Day Is Today’ was launched recently. In this book, written in the Corona era, he talks about the positive aspects of life. In a special conversation with Bhaskar, Anupam gave suggestions on how to live life. Read the main parts of the interview …

Question: During the Corona period, frustration increased, people lost their jobs, businesses came to a standstill. Many actors in Bollywood have committed suicide. In such a situation, how can a person make the best of his life?

Answer: When I arrived in Mumbai from New York on March 20, I realized that the epidemic would affect our lives. I have never seen the streets of Mumbai deserted like this. The airport was never seen. My friend Anil Kapoor said not to meet anyone 14 days ago. However, I am an optimistic person. But, I wondered if I could see any ray of hope in it. What silver lining can be seen behind the clouds. Then one day the cuckoo’s cuckoo and the birds gave a chip.

It was the first time in my 39 year stay in Mumbai that I felt like humans were in cages and animals and birds were looking free. In any case, we have to find positivity in life. I have not reached this stage just because of my talent. My attitude will also play an important role in this. Never let optimism get in the way. You have to have this attitude. Regardless of how bad the situation is, you should see a light beam of light. He must find it.

Question: Did you feel most positive during the entire Corona period?

Question: That man needs nothing but three things in his lifetime. We keep running after the mirage, which makes no difference. For example, we need expensive bags, dark glasses and expensive cars, but when the lockdown was announced, only three things were on everyone’s mind. Number one somehow reach out to your parents, spouses and kids. Number two is just to somehow get very important things. A third WiFi should be run to keep in touch with the world.

This round has proved positive for us in many ways. Talked to forgotten friends and relatives. Discovered new hobbies and habits. I had a tenth grade photo with 150 friends. I contacted 40 of them. Talked to them. Meditation is done collectively. There are poses in life, which are desperately needed.

Question: What was the beautiful thing about Sushant Singh Rajput that you felt during the shooting?

Answer: There was a sense of wonder in Sushant’s eyes. His charisma was also reflected in his words. He wanted to do a lot in life. I am so sad that it is not now. They must have had many dreams. When we did a biopic of Mahendra Singh Dhoni, when I saw how hard he was. Their lack will always be missed.

Question: You are 65 years old. More active than his peers, even reached out to Hollywood. Now what do we do that is absolutely ‘unique’?

Answer: The interval of life has just come. Our morale comes from within. I try not to lie to myself. I take care of my health I am not afraid of failure. People usually stop at any stage of life to see if they succeed by trying something new. With this kind of approach, we live as a normal one.

My father said a long time ago, ‘Failure is an event, not a person’. This means that human beings do not fail, circumstances fail. An accident happens in someone’s life. The other thing was that making anyone happy is the easiest thing to do. I adhere to both. Don’t take care of losing anything. All of this together keeps me active. When the eyes are open every morning, thank God that the eyes are open. A new day has begun. life is Beautiful.

Question: Which of your mother’s lessons has helped you the most in this age of corona? Tell me, is there a joke in the book?

Answer: The title of the book is from the teachings given by the mother. When we were little, mother used to put me and my younger brother Raju on foot at the school gate for 15 minutes. Giving both of them a box of food, she used to say in Kashmiri, ‘Today is your best day’. Today is the best day of your life. So we were always happy when we won or lost in school or drama. The rest of the mother has to learn endurance.

Question: When you were writing the book, what did you think about the state of the world caused by the corona virus?

Answer: Mankind was very angry at this act. We forgot that there are more animals and creatures living in it. We got so lost in our greed that no one else cared. In such a situation, this little virus taught us a lesson that we have to take care of others as well. You have to control your greed. When the sea churns, the poison also comes out with nectar. So, in the age to come, people will live with empathy. Will think of another.