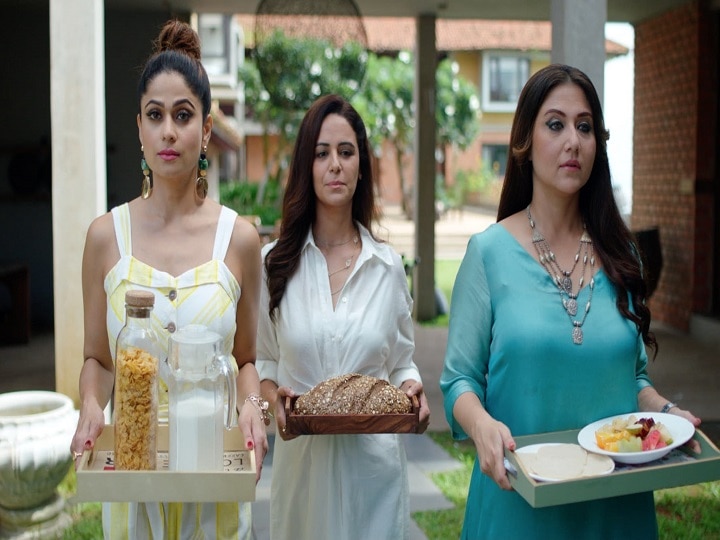 When love ends in a relationship, it becomes a prison. No one wants to be in jail. Freedom is a human right. But to get rid of the relationship of black widows, three married women together end their husbands. The work is done in a jiffy but the question is what is next. Will there be a police case if three people go missing? Will there be any news about it? There will be no investigation. Wives will not doubt. Will it survive? Freedom also has its value. Only two corpses are found here and the bribe becomes more complicated when the husband of one returns alive. Now how will the conspiratorial wives survive

The black widow is the black venomous spider. A black widow is also called a woman who commits more than one murder for her lover or lovers. The black widow is also defined as a woman who becomes a suicide bomber, whose husband has been murdered. But Black Widow is the password in this webseries that came on the G5. Here three friends Vera (Mona Singh), Kavita (Shamita Shetty) Jaya (Swastik Mukherjee) are fed up with their husbands’ atrocities. One beats his wife badly, another puts his wife in front of others to advance in his career and a third threatens to kill his daughter even if the relationship breaks down. How to live in such a relationship? The story revolves around three women and manages to tie them from beginning to end.

Black Widow is a 12-episode webseries with frequent fluctuations. In the very first episode, the police enter after the husband’s motorboat explodes and then soon a new color comes into the story. The lives of the three husbands, their business, police investigations, one murder after another, money laundering, bargaining and blackmailing speed up the story. Pictures of husband’s torture or husband-wife’s personal life disappear. The focus of the series is on the intertwined crime stories. The drug investigation also tracks the drug industry. In which the case of secret trial of vaccine comes out in an inaccessible village of Bihar and then firing is done.

The entry of new men takes place in the lives of Vera, Kavita and Jaya, but in a different style. The good thing is that the writer-director did not hear this. Mora Singh plays the role of Vera, while Shamita Shetty, composed of poetry, is emotionally insecure and the weakest link in the trio. Shamita has played this role well. After a long time, he is seen doing justice to any role. Swastik is an excellent actress and here again she has proved this. Despite the simplicity of the story here, the three characters kept the Black Widows together. Drama over happens somewhere. The beginning of Black Widows shows a comic tone and black humor, which gradually disappears. The whole affair is limited to sensations and focuses directly on the events and the only thing left for the audience is whether the police will expose the black video.

The Black Widow is interesting in its composition. The characters of all three heroines are well written. S.I.T. There are also interesting levels in the character of Parambrit Chattopadhyay as officer Pankaj Mishra. While Raima Sen’s entry lets the story go smoothly. Even after a while Rayama becomes the main part of the story. Many other small characters also come here from time to time. After Corona, there is a greater risk of a man-made virus and the discovery of a vaccine for the virus is nothing short of thrilling. The writer-director has delivered this thing well here. Blood windows are far from their original ideas but they don’t break. Credit goes to director Birsa Dasgupta, who comes from a family with a strong Bengali background. Earlier, his thriller webseries came on Mafia G5, which was much loved. Here too Birsa has managed to control the color-changing story like a chameleon.