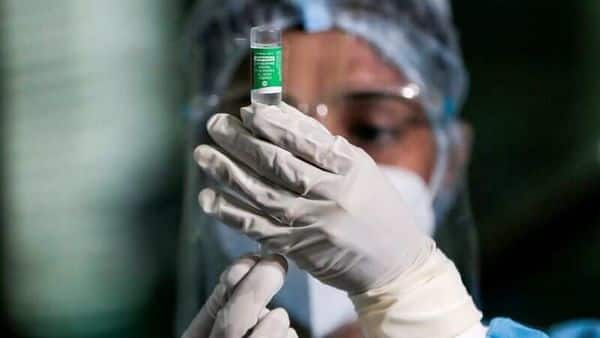 U.S. health officials called for a pause in using the J&J vaccine on Tuesday after six women – out of an estimated seven million people who received the vaccine in the U.S. – developed blood clots in the brain and other parts of the body. within two weeks of vaccination.

The move came after similar clotting problems were reported in at least 140 people in Europe, most of them women, who received the Covid-19 vaccine manufactured by AstraZeneca.

At least 34 million in Europe have received the AstraZeneca vaccine, which has not been approved for use in the United States

J&J said Wednesday that it will delay the launch of its vaccine in Europe and suspend vaccinations in its vaccine trials. A federal committee said Wednesday that more information is needed to determine whether vaccine use should resume, be discontinued, or limited to certain groups of the population. In a letter published Friday in the New England Journal of Medicine, three J&J scientists said there was not enough evidence to claim the company’s vaccine caused the six cases of clotting.

Scientists said the small number of clotting cases and the fact that more women than men may have gotten the AstraZeneca vaccine make it difficult to draw firm conclusions that women are at increased risk. Over time, they said, men could prove as vulnerable to the rare condition as women are.

Women are known to have stronger immune reactions to vaccines than men.

“It’s a blessing and a curse,” said Dr. Sabra Klein, a professor of molecular microbiology and immunology at the Johns Hopkins Bloomberg School of Public Health, of the strongest immune response in women. It could help explain why Covid-19 tends to be less fatal in women than in men, but it could also underlie a greater likelihood of women experiencing serious side effects after vaccination, as well as their increased risk of autoimmune disease in which the immune system attacks the body, he said.

In two studies, published in April in the New England Journal of Medicine, researchers found that the clotting condition seen in some AstraZeneca vaccine recipients closely resembled a rare condition called heparin-induced thrombocytopenia or HIT. The condition, which in rare cases affects people who have been given the heparin-thinning drug, involves both abnormal clotting and a drop in the levels of blood clot-forming components known as platelets.

A case report of a 48-year-old woman who received the J&J vaccine described a similar phenomenon: low levels of platelets and blood clots in both the brain and digestive system.

HIT is triggered by a wandering antibody reaction that activates platelets, causing them to clump together to form clots. In case of clotting problems following vaccination, the patients did not receive heparin, only a vaccine. Scientists now call the condition vaccine-induced immune thrombocytopenia thrombocytopenia or VITT.

“When we talk about women who are most at risk, my suspicion is that it is … an immunological reaction and that there is some molecule [in the vaccine] which is mimicking heparin, “said Dr. Jean Connors, a hematologist at Brigham and Women’s Hospital in Boston.

Both J&J and AstraZeneca vaccines use so-called viral vector technology, in which genetic instructions for a key component of the novel coronavirus are placed inside a harmless virus and injected into the body to trigger an immune response to the actual pathogen.

Theodore Warkentin, a HIT expert at McMaster University in Ontario, Canada, said his research has shown that women who are given heparin after cardiac or orthopedic surgery are more likely than men to experience the condition.

“It could be that this vaccine effect, which mimics this adverse drug reaction in many ways, could be a female predisposition,” said Dr. Warkentin, who is also studying vaccine-related blood clots.

Some doctors have speculated that women’s apparently increased risk for clotting disorder following vaccination with the J&J or AstraZeneca vaccines could be explained by pregnancy or using birth control pills. Both pregnancy and the hormones found in birth control pills can increase the body’s ability to clot.

Of the six women who developed clots after receiving the J&J vaccine, however, only one was using hormones and none had known blood clotting disorders. And the clots that affected women after vaccination differ from the clots seen in the general population, which typically aren’t accompanied by a drop in platelet levels.

In a late-stage J&J study, only one individual experienced this type of blood clotting reaction after receiving the vaccine, the company said, out of more than 43,000 people who were vaccinated. Clotting disorder was not reported among the tens of thousands of patients who received the vaccine in the AstraZeneca studies.