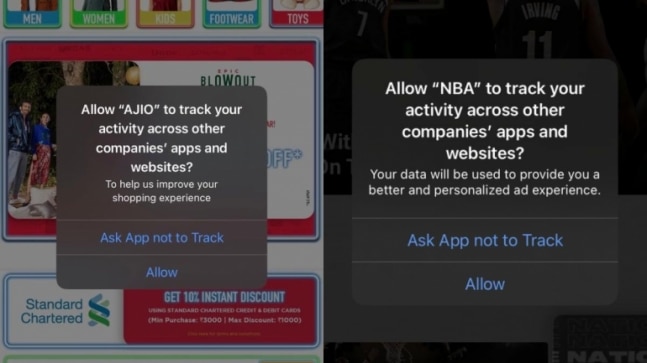 Apple is expected to introduce privacy labels that require user permission on iOS 14.4 in January or February, but it looks like things are moving ahead of schedule. IPhones running iOS 14.3 have started showing privacy prompts for some apps. I found an unexpected privacy message when I opened the Ajio online shopping app on my iPhone which is currently on iOS 14.3. Not just me, several iPhone users around the world are now reporting seeing these messages for some apps, including the NBA app.

The privacy prompt that is now visible on some iPhones asks the user if they want to allow the app to start tracking activities on “other company’s apps and websites” or if they want to ask the app not to track. Apple also explains in this message that the app mentioned will use your data “to provide you with a better and more personalized advertising experience”. This includes the data generated by your online behavior, but especially the personal data collected from all online devices and services.

Apple announced that its privacy features will be part of iOS 14.4 and will be rolled out next year. This was a postponement because Apple had previously chosen to roll out privacy features in September earlier this year. But the sudden appearance of these messages may be Apple testing them. When I stumbled upon the privacy request that Apple threw at me when I opened the Ajio app, I realized how I will be protected by the online trackers that a horde of services are aggressively using for their business. Now I’m curious when it will arrive for Facebook services, including Instagram, Messenger, and possibly WhatsApp.

After all, Facebook is leading the campaign against Apple over new privacy changes for iPhone software. It has posted full-page ads in American newspapers and has gone so far as to mislead its users through various means. Facebook is leveraging its partnerships with small businesses to push its point, but in a veiled attack on Apple. Facebook has said Apple’s privacy changes will hinder small businesses without saying their business will be hurt much more.

“They are hurting small businesses and publishers who are already struggling with a pandemic,” Facebook said in a blog post. “These changes will directly affect their ability to use advertising budgets efficiently and effectively.” Instagram manager Adam Mosseri seconded with Facebook (obviously) saying that user privacy is important but shouldn’t be at the expense of businesses. Simply put, Mosseri is saying that privacy is important but not as much as the business his company (and parent company) is doing.

Facebook has been criticized by several privacy advocates, including recent criticism from the Electronic Frontier Foundation, also called EFF. According to EFF, Facebook isn’t telling users the whole story when it goes against the new changes in iOS 14. “Facebook recently launched a campaign advertising itself as a protector of small businesses. This is a ridiculous attempt by Facebook to distract you from its lack of experience with anti-competitive behavior and privacy concerns while trying to derail Apple’s pro-privacy changes that are detrimental to Facebook’s business, “wrote EFF in. a blog post.

Apple, however, did not commit to the replication but criticized Facebook earlier this year, stating that Facebook does not value user privacy. “We believe it’s a simple matter of defending our users,” Apple said, adding that “users should know when their data is being collected and shared between other apps and websites – and they should have the ability to allow it or not. ” It claimed that users deserve control over their privacy, something that has been the subject of lengthy debates that ultimately resulted in nothing meaningful or beneficial to users. Online users are still prone to monitoring and collecting data from large tech companies.