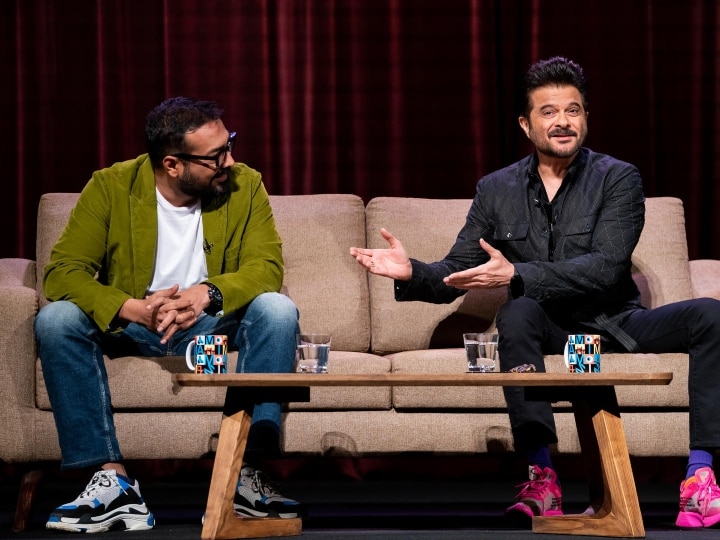 AK vs. AK Review: No one thinks about anyone in the film line. All consider themselves bigger and better than others, but when the opportunity arises they bow their heads against the donkey. The name of the walk here is a car. People don’t even hesitate to ride in the lorry if you walk. In this industry, the star shines on anyone, but no sultan than at any time. The star for forty years can be seen lying on a dark street tomorrow and the one who has been struggling for forty years, tomorrow may be the famous face surrounded by flash blazing cameras. There is not always friendship or enmity in this world. But the true stories here rarely come out in years. Director Vikramaditya Motwani has brought some pictures of this world in his AK Versus AK, which is not real but a film. Yes, it certainly creates the illusion of being real.

The film does not fit into the traditional grooves on Netflix. Its composition is different. Here on the screen you will see the characters with their real names, which creates a different kind of connection with them. On one side is Zanzibar actor Anil Kapoor, on the other side, director Anurag Kashyap, who is constantly loved and hated by the people. Anil wants Anurag to be a hero and make a film with him.

Anurag says that Anil is old and he should play the role of the old father of heroines. On a film stage, the two are constantly drawn to each other. The matter escalates to the point that an angry Anurag kills Anil by pouring glass water on the table into his mouth.

He is boycotted in the industry and refuses to do his film till Nawazuddin Siddiqui. Anurag went to Anil to tell the story of his film. Anil gives them a little answer that there is no time for the next two years. I will give you the same answer after two years. Here is a twist in the story.

“I have kidnapped your daughter Sonam Kapoor,” Anurag Kashyap told Anil Kapoor. There are ten hours of the night to find him and save him alive. What he will do to find his daughter will be recorded in the book. This will be the film. In which all the spirit-action-drama will be real. What is the reality of the whole matter, this is the next story.

The bowl inside the bowl, even more obscure than the son’s father. Like this puzzle revolving around the film, some shocking things have come out in the film. Here are two beautiful things. One is that when Anil Kapoor and Anurag Kashyap work on screen and when it really happens, it’s hard to catch up. His personal life is like the dialogue of a film.

Another beauty is the writing of the film. Vikramaditya Motwani has done justice to the script and put it on screen with full understanding. This film will really give courage to those who want to take the risk of experimenting in cinema. It also includes young filmmakers and older actors. The film will prolong Anil Kapoor’s career.

AK Versus AK Sanjay Dutt has given a lesson to the people that a biopic film cannot be the center of a career. A career will only get a tonic through innovation and the courage to take risks. In such a scenario, Hindi cinema needs Anurag Kashyap and Vikramaditya Motwani more than Vidhu Vinod Chopra and Sanju Hira for a bright future.

Anil Kapoor has said over and over again in the film that I have been a star for forty years and will remain so till my death. His words take power because there is merit in his work. But is it possible to be a star without a filmmaker like Anurag? Who the big star or director. It is not possible to end this discussion, at least in Hindi.

AK Versus AK is a creation of love from cinema. Love such a movie, for which one can die. Anurag Kashyap is good here as an actor. They have done their job well. The treatment of the film is so real that the minds of those who hate Anurag have been like in many places. So, he should watch this movie too.