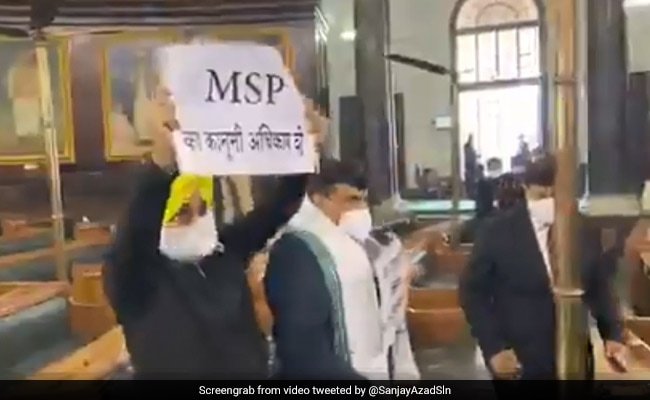 Your MPs shouted slogans against the agricultural law in Parliament

Sanjay Singh tweeted the video, in which he and he were chanting slogans inside the Central Hall against Bhagwan Man, agricultural laws and protesting with posters in hand. One of them said, “Take back the anti-farmer black law.”

A rally in front of the Prime Minister in Parliament to wake up the dictatorial government to hear the deaf ear, “withdraw the anti-peasant black law”, stop calling donors terrorists. pic.twitter.com/X8MF2pxnad

The video shows several leaders standing with Prime Minister Modi. After talking to some leaders, the Prime Minister walked out of the Central Hall. Meanwhile, you MPs kept chanting slogans.

AAP MP Sanjay Singh told NDTV, “Parliament session is not being convened. We have not been given a chance to talk to the Prime Minister and present our side. Aam Aadmi Party MP Bhagwant Mann and I have appealed to withdraw the black law in the Central Hall during today’s program.” “Millions of farmers are protesting. We are in support of the farmers’ movement.”